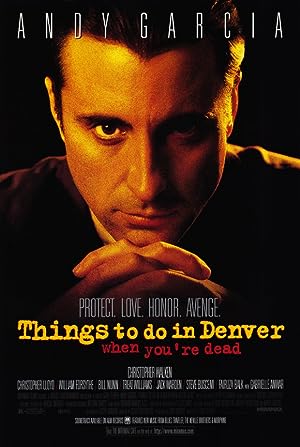 Synopsis: Jimmy the Saint's business is videotaping the terminally-ill, so that they will be around to give 'Afterlife Advice' to their survivors. He hasn't been doing too well lately and has had to turn to loan-sharks to accomodate his failing business, as well as his expensive personal tastes. When an evil gangster-overlord buys up his note and demands a favor of Jimmy, in exchange for the interest that he can't afford, Jimmy capitulates. Jimmy is to scare someone for the gangster-overlord--really rough them up. Without giving too much away (spoiler), the scene goes down badly and Jimmy and his crew all end up with contracts on their heads for their trouble.
Genre: Crime, Drama
Director(s): Gary Fleder
Actors: Andy Garcia, Christopher Lloyd, William Forsythe, Bill Nunn
Production: Miramax
2 wins.

Angie, go to your spot.

went upstairs to kiss her...

# And I been drinkin'|from a broken cup #

# Your house is on fire|Children are gone #

you wanted a piece of quim,|you knew where to go.

You left your wife at home.|You... You hit the spots.

Before you could say beef bayonet,|you got a bangtail on your arm...

Now you got your fuckin' AIDS.

You got your raised|feminist consciousness,

Then you got your movements... a movement|for this, a movement for that.

You got too many movements,|ya ask me.

Look who's here!|Jimmy the Saint!

You heard about this thing,|that fuckin' Bernard?

- No, what happened?|- I knew the kid was lunchy, but not this fuckin' lunchy.

They picked him up at a schoolyard|fishin' for saplings.

- No shit.|- They oughta neuter that fuckin' kid.

It's a brain thing, Joe,|with Bernard, not a balls thing.

Aw, give it a name. Come on. Anything|you can say is a problem with a man.

It's a balls thing.

Jimmy the Saint from Flatbush.

But in his day,|the bitch's bastard.

# Turn the corner, fool|is what she said #

# A hundred dollars|makes the talkin' said #

Because after you've gone,

your money|goes to somebody else,

Your kids fall in love with strangers.

how you are remembered|cannot be sullied,

Why don't we take a little break,|and we'll continue later?

Julie, call and check|on that...

Here we have Mr. Jergen.|He's doing his taping.

he follows a very carefully composed list|of questions which he poses to Mr. Jergen...

and which Mr. Jergen's loved ones|will be able to access once he's gone.

at a time in late adolescence|when Stevie needed him the most.

Scott Mitchell Rosenberg is an American film, television, and comic book producer. He is the chairman of Platinum Studios, an entertainment company that controls a library of comic-book characters and adapts them for film, television and other media. He is also the former founder and president of Malibu Comics, and is a former senior executive vice president for Marvel Comics. more…