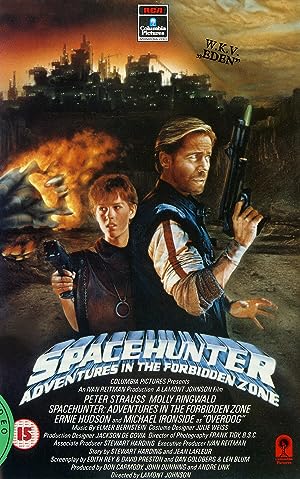 Spacehunter: Adventures In The Forbidden Zone

...where, on the starboard viewing ports,|to the right of the ship...

...caught in the gravitation field|of its giant big brother.

As we pass between these two suns,|we are given a rare opportunity...

...to view one of the scenic and|scientific marvels of the known universe.

This breathtaking effect is caused by...

...the condensation of nebular gases|in the magnetic--

Please, do not be alarmed.|It appears we have sustained damage...

...from an unexpected condensation|of molten gases.

You will now proceed|to the designated escape shuttle.

The air-lock doors will seal automatically|once you are safely aboard.

The escape shuttles|have been programmed...

...to seek out the nearest E-type,|or Earth-type planet.

When your shuttle has homed in|on the planet most accommodating...

...to the needs of Earth-natives, you will be|landed and processed with full security.

Do not be alarmed.|You have been traveling suspended...

...in the Merrill-Becker 3,000|Emergency Space Shuttle.

For your comfort you've been given|a mild cryogenic which will wear off...

...in couple of minutes. Do not panic.|An emergency homing device...

...has been automatically triggered|to ensure your safe retrieval.

You will now remove your helmets.

Please stay by your shuttle|and take a few moments to relax.

You will be given further instructions|in a short time.

I got a lot of messages for you, Wolff.

We got a transmission|from a guy on Omega Six.

He's got eight tons of merilium scrap|he wants you to pick up when you can.

And the police called from the 42 sector.|You've got 105 parking tickets.

I think you should take care of that.

Your ex-wife is looking for you.

She hasn't gotten a check from you|in three months.

The administrator of your housing unit|says you're two months behind in rent.

You have five days to pay|or you're out in the street.

Chalmers! The communicator's out again.

Chalmers, the communicator is out again.

Not to mention a new drive-systems|regulator, a Freon activator...

...and of course a complete|scan-systems overhaul.

Okay, what did you do to this?

You kicked it? Is that what|they taught you at Sector Control?

Who listened? I thought you would fix|that spectometer last week?

I keep starting but you never let me finish.

Find an all-space mayday for Terra Sector,|something about a shuttle rescue.

...and is moving to landing|on Planet Terra 11.

Yeah. Too much for a shuttle rescue.

Are you looking for this?

Seems like we put a colony up there|a long time ago, before the war.

There was a plague or something during|the stalemate. Try it on the computer.

Spacehunter: Adventures In The Forbidden Zone