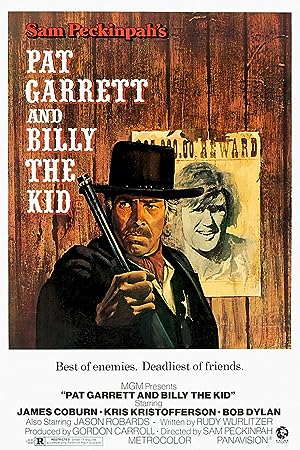 Synopsis: It's 1881 in New Mexico, and the times they are a'changing. Pat Garrett, erstwhile travelling companion of the outlaw Billy the Kid has become a sheriff, tasked by cattle interests with ridding the territory of Billy. After Billy escapes, Pat assembles a posse and chases him through the territory, culminating in a final confrontation at Fort Sumner, but is unaware of the full scope of the cattle interests' plans for the New West.
Genre: Biography, Drama, Western
Director(s): Sam Peckinpah
Actors: James Coburn, Kris Kristofferson, Richard Jaeckel, Katy Jurado
Production: MGM Home Entertainment
Nominated for 1 BAFTA Film Award. Another 3 nominations.

Thought I told you not to run|them sheep on my land!

It's my land, Garrett.

It became mine when|we signed that lease.

I'm paying you off when we get back,|and I'm breaking that goddamn lease.

- I don't allow the law would agree to that.|- What law is that?

- Goddamn law is ruining the country.|- Ain't you still a part of that law?

Something wrong with that harness.

I believe they elected you and paid you|good wages for killing the Kid, huh?

You rotten son of a bitch.

- You try your luck, Eno.|- You miss more than anybody else does.

You want the breast or the thigh?

What he always gets.

I want a breast and a thigh.

- It's fair shooting for an old married man.|- Lucky, I guess. How are you, Kid?

- Looking good.|- Having some kind of fiesta? Hello, Black.

We always live like this.|You ought to visit us more often.

I reckon the whole damn territory's|gonna be one big open jug for us now.

Take a two-day ride from Lincoln just to pay|me back the 2 dollars you owe me, Pat?

We ain't gonna be seeing much|of Pat these days.

Say, I understand those Mexican seoritas|are still pretty as ever down there.

I know one's waiting on you, hoss,|with a knife.

- Remember them sisters?|- No. Which ones were they?

That one you got up and asked|how much you owed.

And she said,|"Whatever you think it's worth."

You threw a dime on her pillow.

You don't figure he's too good|to drink with us, do you?

Maybe it's the other way around.

Maybe a year or so down in Mexico|will do you some good.

I didn't figure you'd bother|to make a ride out here.

Shit, you know me better than that.

You heard about Eben?

He drowned in the Rio Grande.

Trying to get to that old Mex|you're talking about.

He took two of the posse with him.

I'm sorry to hear that.

At least he knew when it was|the right time to leave.

We did have some times, didn't we?

It's gotta be pretty hard|to turn your back on all that.

You want it straight?

If that's what you're here for.

Out of the country.

But are they telling me,|or are they asking me?

But in five days, I'm making you.

Sold out to the Santa Fe Rlng.

How does it feel?

Hey, why don't you stick around.

No, I gotta get back.

I ain't worried about my luck.

Why don't you kill him.

Get on up, Billy.|You hear what I'm saying?

I ain't making no money|watching you boys sleep.

You like to waste the best part|of the damn day.

Let that squirrel loose!|You'll shake it to death.

I hate a son of a bitch that gets up|noisy and full of himself.

I ain't in this for my health, hateful.

Coming down hard on him|the day after he got his new badge.

Rudolph "Rudy" Wurlitzer (born January 3, 1937) is an American novelist and screenwriter.Wurlitzer's fiction includes Nog, Flats, Quake, Slow Fade, and Drop Edge of Yonder. He is also the author of the travel memoir, Hard Travel to Sacred Places, an account of his spiritual journey through Asia after the death of his wife Lynn Davis' 21-year-old son. more…