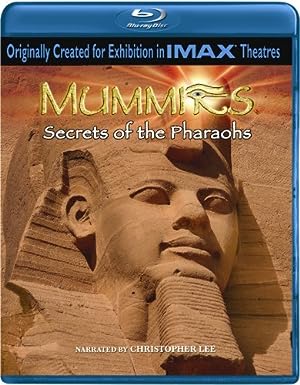 Mummies: Secrets of the Pharaohs

Synopsis: The grail is not the gold, nor the books of ancient wisdom, but the 3,000 year old DNA of the mummies, which may lead to a cure for malaria.
Genre: Biography, Documentary, Drama
Director(s): Keith Melton
Actors: Elana Drago, William Hope, Nasser Memarzia, Crispin Redman
Production: Giant Screen Films
1 nomination.

Ancient land of all and wonder,

who's people whisper from the desert sands.

For the Egyptians life was eternal.

They search the globe for ingredients to

proserve their bodies and their immortality.

With knowledge came from centuries of practice,

a priests created the finest mummies,

the world has ever known.

And now they were on a critical journey.

To return to Egypt, with the ingredients

for the mummification of the pharaoh.

Ramses the Great was being prepared for

the next stage of his life,

when his mummy would ressurect in paradise.

But how they were mummified?

Where they were hidden, and whether

may they still give life today?

These are the secrets of the pharaohs.

There is a handful of mummies, whose names

was written on the bandages and coffins.

These mummies are people, who did not

decomposed, when they died,

because their flesh was preserved by secret methods.

And according to the writing,

these mummies are three of the most

powerful pharaohs, that ever lived.

Ramses the Great, his father and his son.

And in all that time Egypt's gods and

The Egyptians attributed this to the will

of the the gods. "Divine order".

and wanted to live beyond death.

They thought dying was just

a gateway to the next world.

And if they would not not been born on earth,

their lives would continue in paradise.

So they prayed, that their honesty and

offerings would ensure order on earth and beyond.

Th Egyptian universe was controlled by the goddess Ma'at,

who govern the world and the heavens.

Even Ra, the mightiest son god

obeyed the laws of Ma'at.

If Ma'at's order was ever broken,

the sun would not rise.

They called the soul for the essence

of each person his Ba.

After death your Ba faced your final judgement.

Your heart was placed on the scales of judgement,

and wait against the feather of truth.

If you done evel, your heavy heart would tip the scales,

and the Devourer would of innihilate u.

But if you have allways been truthful and rightchous,

your heart would be feather light.

Your soul would fly to paradise

to reenter your body.

Your mummy would come to life in the next world.

A world, in which every momment

But the preparation of a mummy for

this journey remains a secret.

The Egyptians recorded their

tales of war and death...

Their myths and legends...

Everything, except how they mummified their dead.

Strangely, no complete records have been found,

so when the last priest in ancient Egypt died,

he took the secret to his grave.

Many aspects of mummification remain lost,

I was looking at tomb paintings, ancient writings,

The egyptians were getting ingredients for the

mummification from allover the known world.

The first mummies were natural, dried by

a bariel in hot desert sands.

But when the egyptians started

to use tombs in pyramids,

the bodies was no longer in contact with the sand,

so they had to preserve the body artificially.

And the art of mummification was born.

To dry the body, embalmers covered it

for 35 days with Natron,

Mummies: Secrets of the Pharaohs