Synopsis: It's 2274 and on the surface, it all seems to be an idyllic society. Living in a city within an enclosed dome, there is little or no work for humans to perform and inhabitants are free to pursue all of the pleasures of life. There is one catch however: your life is limited and when you reach 30, it is terminated in a quasi-religious ceremony known as Carousel. Some, known as runners, do try to escape their fate when the time comes and it's the job of Sandmen to track them down and kill them. Logan is such a man and with several years before his own termination date, thinks nothing of the job he does. Soon after meeting a young woman, Jessica-6, he is ordered to become a runner himself and infiltrate a community outside the dome known as Sanctuary and to destroy it. Pursued by his friend Francis, also a Sandman, Logan and Jessica find their way to the outside. There they discover a beautiful, virtually uninhabited world. Logan realizes that he must return to the dome to tell them what h
Genre: Action, Sci-Fi
Director(s): Michael Anderson
Actors: Michael York, Richard Jordan, Jenny Agutter, Roscoe Lee Browne
Production: MGM
Nominated for 2 Oscars. Another 7 wins & 2 nominations.

BEFORE AND DURING TITLES

The moon and stars are visible, but as CAMERA looks down, the SCREEN

fills with dark, billowing clouds. CAMERA moves into the clouds and

just as they blank out the SCREEN, a distant shimmer of light

becomes visible. Moving toward it, the shimmer becomes

A glowing but not transparent structure stretching off into the

clouds that press it. CAMERA continues to move in until the

detailed structural webbing of the dome fills the SCREEN and then

CAMERA MOVES THROUGH IT and we see

structures standing off without end) -a marvelous crystalline city

multi-leveled but human scale, crisscrossed by the flickering clear

tubes of the MAZE- CARS.

As a MAZE-CAR slides softly to a stop.

swiftly along the rooftop and disappears into an open elevator

which instantly starts to descend.

great height. As it reaches the courtyard the RUNNER darts out,

pushes into the crowd.

As he reappears around a corner, skirts a brimming pool and makes

courtyard. He is moving even faster now, glancing back as if he

Above, at the railing of an oval light well, dressed in black and

silver, a figure holding an odd looking weapon lazily in one hand

-- and watching. It is FRANCIS.

Moving rapidly down the corridor, he suddenly stops as if feeling

the presence above. He looks up, sees the SANDMAN and his face

breaks in terror. He wheels, frantic, screaming, runs back into the

The crowd melting, parting to reveal the Runner backed against the

pool. People are YELLING, shaking their fists, terribly excited and

Seeming to burst aflame in the LENS, then slipping BELOW FRAME to

closing in behind him, applauding, congratulating him.

Arriving at the pool where the body lies, half immersed. He leans

over, lifts the right hand from the water, revealing a palm with a

black flowercrystal shape in it. He lets the hand fall back now as

the crowd CHEERS and APPLAUDS him.

Closing in until the crystal fills the SCREEN.

in one of many cubicles. Standing outside, looking in, LOGAN, dimly

lies, swaddled and coccooned in the rosy auto-tender which caters

to the baby's every need. Faint MUSIC bubbles like distant

Logan is twenty-five, strong, virile (yet sensitive) with a kind of

He is somewhat manic...proud...as he peers through the nursery

window into a kind of foam cocoon which cradles THREE SLEEPING

INFANTS. Logan is KNOCKING on the soundless glass. 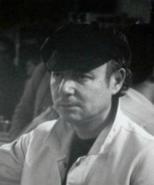 David Zelag Goodman was a playwright and screenwriter for both TV and film. His most prolific period was from the 1960s to the early 1980s. He was nominated for an Academy Award for Lovers and Other Strangers, though he did not win. more…