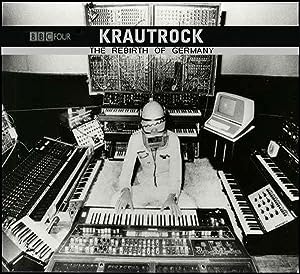 Krautrock: The Rebirth of Germany

- This programme contains some strong language.

Everything from cities to culture lies in ruins.

It was time to rebuild.

This is the story of a generation of musicians

who would forge a new musical identity for Germany.

and uncompromising music ever heard.

They shared one common goal -

a forward-looking desire to transcend Germany's past.

But that didn't stop the music press in war-obsessed Britain

from labelling them Krautrock.

willkommen to the sound of Krautrock.

This programme contains some strong language.

In the last '60s, this was what German pop music looked like.

It was known as Schlager.

A world away from what was happening on the streets of West Germany.

SONG:
"All Along The Watchtower"

The year of a global youthful revolution.

And West Berlin was no exception.

# There must be some kind of way outta here

Like their brothers in the US and the UK,

these kids were sick of "The Man",

but in Germany, the establishment had more to answer for.

Following the German surrender in 1945,

the country had been divvied up by the victors.

In West Germany, the programme of foreign aid

had kickstarted the Wirtschaftswunder,

an economic miracle that saw the country prosper

But the people running this shiny new Germany

were the very same people who had been in power during the war.

Nowhere was this more so than in Bavaria,

the Alpine heart of southern Germany,

an area with strong historical ties to National Socialism.

Hitler had chosen to start his revolution in Munich

and when not waging Blitzkrieg,

the Fuhrer could be found relaxing high up in the Bavarian mountains.

a group of commune-dwelling musicians from Munich,

the past seemed all too present in 1968.

After the war, you couldn't just, erm...

if they were Nazis, they had to take them,

because you can't just kick 'em out and have no teachers at all.

It was all still there,

but it wasn't as loud any more.

Nobody dared to say Hitler or something like that.

it wasn't there in German language.

Our parents didn't really talk about Hitler, you see,

and about the Jews and what this was all about.

They were just in true silence.

Nobody would really talk about it.

If I asked my father,

If you go to Dachau, which is 30km away from here,

talk to the people there.

"We didn't know anything about it."

In those days, there were bloody Nazis around, all over the place.

There was rebellion against them.

We had these big revolutionary things in the '60s.

All Munich was on the street fighting against police,

against politics, against all of that.

We didn't have guns or the tools to chase them away,

but we could make music

with the same understanding, the same desires.

that soundtracked their vision of a brave new world.

Of course we didn't want to make English music or American music,

and we didn't want to make German Schlager music

Discuss this Krautrock: The Rebirth of Germany script with the community:

Krautrock: The Rebirth of Germany