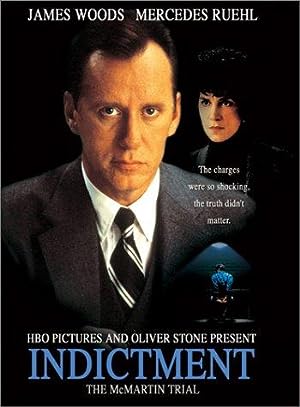 Synopsis: Based on a real-life court case, the film finds members of the McMartin family on trial for alleged sexual molestation and abuse of children at their well-regarded preschool. Publicity-seeking attorney Danny Davis initially defends the McMartins for selfish reasons, but he slowly begins to believe that they are innocent. Davis has his work cut out for him, however, since the media have demonized the family, and prosecuting lawyer Lael Rubin is a tough opponent.
Genre: Drama, Thriller
Director(s): Mick Jackson
Actors: James Woods, Mercedes Ruehl, Lolita Davidovich, Sada Thompson
Production: Ixtlan
Won 2 Golden Globes. Another 6 wins & 15 nominations.

to the police station approximately 10:30 a.m.

with her son, Malcolm, age two and a half years, and filed a complaint

an interview with the child

and with his mother. Mrs. Johnson alleges

that her son has been molested while attending preschool

that her son named

of 12 schoolchildren, six to eight years of age. Subject stopped

and talked to nobody. TV announcer:

The Eyewitness News Team. From the desert to the sea

to all of Southern California, a good evening.

has been described as one of the most

is now able to bring you this extraordinary,

out of the mouths of over 60 children, some of them as young

as two years of age. They have allegedly

been keeping a grotesque secret. The secret is they were

(phone rings) and made to appear

in pornographic films. The children were all

Are you watching this? Man:

Call me when it's over. Satz:

What makes their statements

even more extraordinary and shocking is that the owner

of this preschool is 76-year-old

most honored citizen. In fact,

this home video was shot...

the highest award... Watch this.

Look at this. Look. Watch. To me, there isn't anything

that can equal the smile and love of a small child. Forgive me, I go on and on

when I get started on my favorite subject:

But last year the mother

of one of the students, Judy Johnson, noticed her

two-and-a-half-year-old son was having a redness

and having nightmares. She accused Virginia McMartin's

sent letters to parents whose children had attended

the McMartin Preschool, asking them to question

This is the most

sickening thing. Yeah, and guess who

their lawyer wants to take

this case off his hands? Danny, no.

Not these people. The children all replied

that nothing had happened. That was until the district

attorney took the children to this nationally recognized

International. She drew forth horrifying

stories of molestation from literally hundreds

on play therapy session which she videotaped. I don't think the depth

of terror that can be put into a child

should be underestimated. I've been working this field

for 13 years, and I haven't seen a situation

that compares to this. It's simply horrifying. They said the teachers mutilated

animals at their school... Oh, God, the poor babies. ...their parents