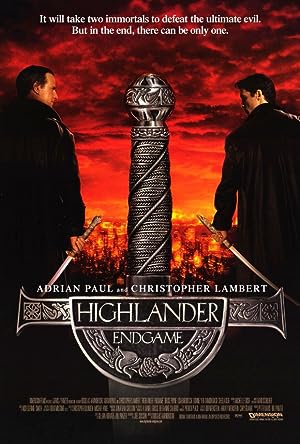 Synopsis: When Connor MacLeod sees his old friend Rachel die in an explosion, he's had it with his immortal life and the endless pain it brings him and those he loves. He locks himself inside the Sanctuary, a Watcher-organized retreat stationed on holy ground, where immortals who are tired of the game can go to forever escape it, as well as to ensure that The Prize never falls into the wrong hands. But when an old enemy, Jacob Kell, and his posse of assassins attack the Sanctuary and kill everyone there but Connor, he is forced out into the open and into battle. Kell and Connor were friends once, and knew each other back when Connor was cast from Glenfinnan; he returned when news came that his mother was to be burned at the stake, and in the attempt to free her, Kell was killed by none other than Connor himself, and became an immortal, bitter with hate, and devoted to making Connor's life a living hell. In the present day, Connor's kinsman Duncan MacLeod is attacked by Kell's posse, including Ka
Genre: Action, Adventure, Fantasy
Director(s): Douglas Aarniokoski
Actors: Adrian Paul, Christopher Lambert, Bruce Payne, Lisa Barbuscia
Production: Miramax Films

Joel Soisson is an American screenwriter, producer and director. He works primarily in the field of independent film. His numerous credits include Dracula 2000, A Nightmare on Elm Street 2: Freddy's Revenge, Bill & Ted's Excellent Adventure, The Prophecy, Little Pink House and Buffalo Rider. more…