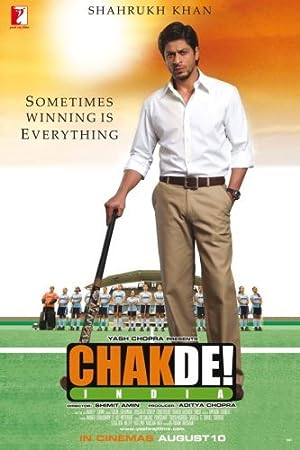 Synopsis: Kabir Khan (Shahrukh Khan) knows what it's like to come back from the dead. The ex Indian Captain has now come back in the avatar of the Coach of the Indian Women's National Hockey team. A team that exists more on paper and less in reality. The team is a rag-tag bunch of girls with their own agenda. A bunch of girls who have forgotten what it is like to play for the love of the game. Of playing because you want glory for your country. Not because you want a pensioned job or a government flat. They have all forgotten the sharp thrill of just holding the hockey stick, keeping their eyes on the ball and playing for all they are worth. They have played every game but hockey to make sure they get selected every year in the Indian National team. But what does it really mean to play for the Indian National team? To play for India? The girls have never known the thrilling energy of being Team India. Of giving their all to see their country's name on a trophy. But Kabir Khan, once a captain, no
Genre: Drama, Family, Sport
Director(s): Shimit Amin
Actors: Shah Rukh Khan, Vidya Malvade, Sagarika Ghatge, Shilpa Shukla
Production: Yash Raj Films
26 wins & 18 nominations.

Last two minutes of the final matcb of World Hockey

lndia is behind Pakistan by 1 goal.

lndian captain Kabir Khan who is in his best format

the team with vigour.

For the suspence of the audience.. .

.. tension is on the faces of lndian and Pakistani official.

When these 2 nations figbts, the tempo becomes high

Ball is witb the Pakistani defender.

Utham singh bas taken tbe possession of the ball from

This is the last chance to save from losing tbe match

at the last minute of the game.

Now we will see who's taking the stroke.

With the decision of the team Captain Kabir Kban

Hello... where is Kabir?

Can you explain what happened on the ground?

Do you think that Pakistani team is better tban lndia?

Why did you take the penalty stroke at the last minute?

We heard that tbe player on tbe other side is

We heard that tbe player on tbe other side is

Because you hugged and shaken hands with bim

We heard that some one from your team purposely

Tell us about the transaction and bribery of this deal.

What do you say?

Kabir Khan, ls there any money transaction on this

His anger and figbt agains us confirms the conclusion..

There is something behind tbis bribery scandal.

We got our conclusion.

Now it is your turn to decide whether Kabir Kban

is a Traitor or not.

lmportant News:
Pakistan beat lndia by 1 Goal at the

Greetings. You are watching AAJ TAK.

Today we are here to say that the lndian Hockey

after losing the match today.

Now its you the lndian public to decide on this issue.

We have two people here to discuss the issue.

Do you think Kabir Khan lost the match purposely to

l don't know whether he purposely lost or not.. But

they have lost it.

We must turn this kind of people upside down.

What do you think? This kind of people sbould have

sent to Pakistan during partition.

We don't know the whereabouts of Kabir Khan.

We couldn't locate him neither Hockey Stadium nor

Authority Complex. Where is Kabir Khan?

How come l not see? Kabir.

Your Grandpa saved every little penny to brought this

He struggled so much from his first savings.

Let us find some peace.

You see tbey will come to know the truth one day.

lf you don't want, don't see anything... But l wantsee

l'll give the tiffen to them. Are you crazy? You want go

against the village people?

What ? Everytime you bring the same thing.

What do you want to do for the coach?

Let itgo. What is with that?

lndian Womens Hockey team can do nothing.

You also do something and go with them.