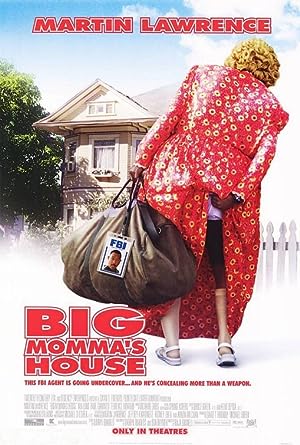 Synopsis: FBI agent Malcolm Turner is known best for being a brilliant, master of disguise. Malcolm's latest assignment sends him to small-town Georgia, where he's assigned to trap a brutal bank robber (and a recent prison escapee) who they suspect will be coming down to visit his ex-girlfriend Sherry and her son. Malcolm sets up a stakeout across from the home of a larger-than-life southern matriarch known as Big Momma, who's about to be visited by Sherry. It's a simple plan, but there's one big problem: Unbeknownst to Sherry, Big Momma has unexpectedly left town. So Malcolm, decides to impersonate the cantankerous Southern granny. Using a few tricks of disguise, he completely transforms himself into Big Momma, even taking on the corpulent septuagenarian's everyday routine-from cooking soul food to delivering babies to "testifying" at the local church. In the mean time, Malcolm starts falling for Sherry, who may or may not be hiding some stolen cash. Now, Malcolm/Big Momma must somehow find a w
Genre: Action, Comedy, Crime
Director(s): Raja Gosnell
Actors: Martin Lawrence, Nia Long, Paul Giamatti, Jascha Washington
Production: 20th Century Fox
1 win & 9 nominations.

Sit down and shut up, you old fool.

Y'all never heard of Soul, Korea?

No doubt. Are you all right?

Could you open the cage? I'm a married man.|I'm not used to this much attention.

Satellite TV and a six-pack|do not a full life make.

On the street, I gotta keep it simple.

You know what I mean? I can't have|a family and home out there distracting me.

That's funny.|I couldn't be out there without it.

OK. We've got a live one, people.|Conference room in five.

Oh, Malcolm. Didn't recognise you|with the make-up off. Got the Michaels file?

I'm just sayin', on the street I can't have|no distractions. I gotta be ready for anything.

He is seen here on security cameras|robbing the Century Union Bank.

You know, how would you like|to go on a little vacation?

Well, you look ready to me.

Got your seat belt on?

Two years ago, he robbed a bank,|popped a guard and the bank manager

and walked out with two million|in cash and bearer bonds.

We got him, but the money|was never recovered.

Twelve hours ago, he killed a prison doctor

and drove out the front gate|in the man's Volvo. Very creative.

- What about the girl from the robbery?|- Lester's girlfriend. Sherry Pierce.

Never convicted. Worked in the bank.

cries on the stand|and walks away with two million large.

Exactly. But we never proved it.

So we find her,|we find Lester, we find the money.

- What about this stepbrother in Oakland?|- You and Gallagher take it.

- Get some warrants. Set up a surveillance.|- Great. Malcolm and I can stay here

and hit the phones.

No, no, I've got something special|planned for you two.

And who knows, Malcolm? Maybe you'll find|an Armani outlet - by the Piggly Wiggly.

Lord, I done told Sadie about this dog.

They just wanted us to sit here|pickin' ticks off our asses.

Nobody's tried to kill you for days.|The stress must be overwhelming.

I'm just here to catch a bad guy.|If it goes down hard, so be it.

If we could get in to plant the surveillance|equipment, we wouldn't be stuck here.

Hey, what do we have here?

Must be one ofthose Southern traditions.|Exchanging baked goods in the street.

Nah, you bring them over.|That's how you meet the new neighbours.

- Where are you going?|- While she's out, I'll set the surveillance.

- Malcolm!|- Four and a half minutes.