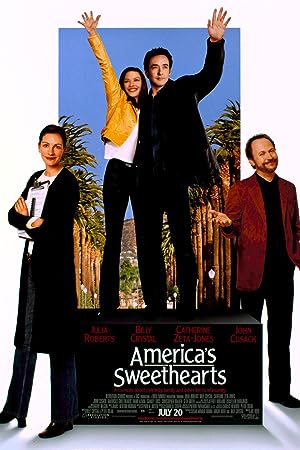 ...in the box-office smash|Autumn with Greg and Peg.

They had the most celebrated marriage|in Hollywood.

Who could forget|how they hit one out of the park...

...in Requiem for an Outfielder?

Because I love you.

I didn't do it. I'm innocent.|Why won't anyone believe me?

-I object, Your Honour!|-You're out of order!

No, you are out of order sir!

I object to the way|my client has been treated.

I object to the fact that I've let|my professional judgment...

...become clouded by my feelings|for my client.

I object to the way the room seems to spin|whenever she walks into it.

I object, Your Honour,|because I love this woman.

Their love opened our eyes...

...in Sasha and the Optometrist.

Read from the top line, Sasha.

God, they were great. Made my job cake.

I did the press for all their movies, all nine.|Six did over $100 million.

They were on top of the world.

Then she blew it|by taking up with that Spaniard.

-Did you cut this yourself?|-No, Chad in marketing--

Rule number two:
Don't take credit|until someone actually says they like what you did.

I hope this isn't too awkward for you.

-I'll never be able to fill your shoes.|-I know.

Kingman's in the screening room and he|wants you to look at something right now.

Then invite him, at his earliest|convenience, to kiss my undercarriage.

-Thank you for coming.|-Why am I here?

I'm just confused. I mean, you did actually fire me|last week, so why am I here?

I brought you to see the new Weidmann film.

Eddie and Gwen's last movie.|You know their movies better than anybody

Could you roll that, please.

I want you to be the first to see|what only I have seen. As a friend.

The film is fine.|I think it's fine, wherever it is.

That's all he sent me. The titles!

"Dave, we could also do these in blue."

-We had to make a Hal Weidmann picture!|-He's won three Oscars. He's a genius.

There's only been one genius|in this business: Seor Wences!

A little lipstick, some hair and his hand!|He had an career for 85 years!

-Remember the crazy guy in the woods?|-Ted Kaczynski.

-Who? The guy at Fox?|-The Unabomber.

The Unabomber.|Remember he lived in that little cabin?

...and had it moved onto his property.

That is where he edits his movies.

That is his little, twisted...

Put him on the speaker.

How are you, darling?

I've been thinking about you.|I wanted to send you a basket or something.

-It's finding its way.|-Could it find its way to the studio?

We have a few little things to do with it,|like finish it.

Great. How is it?

My mother thinks|it's the best thing I've ever done.

William Edward Crystal (born March 14, 1948) is an American actor, writer, producer, director, comedian, and television host. He gained prominence in the 1970s for playing Jodie Dallas on the ABC sitcom Soap and became a Hollywood film star during the late 1980s and 1990s, appearing in the critical and box office successes When Harry Met Sally... (1989), City Slickers (1991), and Analyze This (1999) and providing the voice of Mike Wazowski in the Monsters, Inc. franchise. He has hosted the Academy Awards nine times, beginning in 1990 and most recently in 2012. more…