A TINY BLACK PIECE OF TAPE.

We see it in the center of the large, dimly lit screen. As

the tape is pressed around a door--

It's a major piece of action, running maybe five minutes and

it's all as detailed and accurate as we can make it, with as

many "if only's" included as possible. ("If only" the tape

had been attached up and down instead of around the door,

Wills wouldn't have spotted it and alerted the police; "if

only" the first police car called had gone to investigate,

Baldwin, watching from the Howard Johnson Motor Inn, would

have seen their uniforms and radioed Hunt and Liddy in time

The break-in ends when Leeper arrests the five men. He thought

he only had one guy, so when ten hands were raised he was

surprised. The hands are all encased in Playtex rubber

surgical gloves. HOLD on the hands a moment; then--

The phone rings. WOODWARD fumbles for the receiver, turns on

the bed light. He listens a moment.

No, no trouble, Harry, be right down.

He lies back. The apartment is one room, a small terrace

beyond. Not much of a place.

WOODWARD lies still, staring at the ceiling. He blinks, blinks

It looks, early of a Saturday morning, pretty deserted. Those

reporters that are around are young, bright, and presently

involved in nothing more taxing than drinking coffee and

thumbing through the papers.

HARRY ROSENFELD surveys the scene from his office doorway as

WOODWARD approaches, hangs his coat at his desk, not far

from where ROSENFELD is standing.

to know and love?

You call me in on my day off because

some idiots have broken into local

Harry, why should I be smiling?

As usual, that keen mind of yours

has pegged the situation perfectly.

(chomps on some Maalox

Except (a) it wasn't local Democratic

Headquarters, it was National

idiots, these were special idiots,

seeing as when they were arrested at

gloves and were carrying--

(consults a piece of

--a walkie-talkie, forty rolls of

Not to mention over two thousand 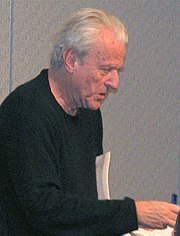