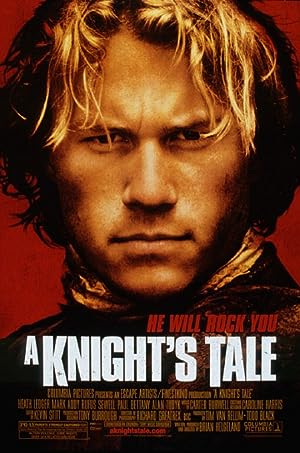 Synopsis: Inspired by "The Canterbury Tales," as well as the early life of William Marshall (later First Earl of Pembroke), this is the story of William, a young squire with a gift for jousting. After his master dies suddenly, the squire hits the road with his cohorts Roland and Wat. On the journey, they stumble across an unknown writer, Chaucer. William, lacking a proper pedigree, convinces Chaucer to forge genealogy documents that will pass him off as a knight. With his newly-minted history in hand, the young man sets out to prove himself a worthy knight at the country's jousting competition, and finds romance along the way.
Genre: Action, Adventure, Romance
Director(s): Brian Helgeland
Actors: Heath Ledger, Rufus Sewell, Shannyn Sossamon, Paul Bettany
Production: Columbia Pictures
4 wins & 10 nominations.

In medieval times a sport arose.|Embraced by noble and peasant fans

alike though only noble knights could|complete. The sport was jousting.

For one of these knights, an|over-the-hill former champion, it was

the end. But for his peasant squire|William, it was merely the beginning.

Should we help him?

He's due in the lists in two minutes.|Two minutes or forfeit.

Three scores to none after two lances.

As long as Sir Ector doesn't|fall off his horse, we've won.

His spirit is gone|but his stench remains.

No, he sleeps. Rouse him.

I haven't eaten in three days!

None of us have!

Squire, Sir Ector must report|at once or forfeit the match.

I haven't eaten in three days!

Three days! What did you eat, mate?!

If you wasn't dead, I would kill you!

I'll ride in his place.

Strip his armor.|I'm riding in his place.

Wat, stop kicking him!|I'm riding in his place. Help me.

It's not Sir William.

It's not Count or Duke or King William.

You must be of noble birth to compete.

A detail. The landscape is food.|Do you want to eat or not?

If the nobles find out,|there'll be the devil to pay.

Then pray that they don't.

The score stands at three lances|to none in favor of Sir Ector.

I tilted against Sir Ector many times.

In practice as his target.|You never struck him.

- Badger me not with details.|- The landscape. Stay on the horse.

He needs 3 points.|He has to knock you off the horse.

I know how to score, Roland.

Get it in the cradle!

William, are you alive?

Get off me! William, can you hear me?

My lord, the final blow of the lance|has bent it onto my head.

He says the final blow of the--

I present your champion, my lord.

Five for Wat. Five for Roland,|who's going home to England.

Straight to the pub for me.|Eel pie, brie tart...

We could do this.

We've done it, boy.|That's silver in your hand.

No, I mean, we can do this.|We can be champions.

Give us your coins.

Give me your coins.

Now, that's one for you.

The tournament in Rouen is in a month.

We could split a bigger prize.

In one month we'd be on our way|to glory and riches.

Or lying in a ditch with Sir Ector.|William, I just want to go home.

You're going the wrong way!

You can't even joust.

Most of it is the guts to take a blow.|Guts I have.

And technique?|I have a month to learn that.

- In the practice ring.|- You're not of noble birth.

How did the nobles become noble|in the first place?

They took it at the tip of a sword.|I'll do it with a lance.

A man can change his stars. I won't|spend the rest of my life as nothing.

That is nothing. And that's|where glory will take us.

Brian Thomas Helgeland (born January 17, 1961) is an American screenwriter, film producer and director. He is most known for writing the screenplays for L.A. Confidential (for which he received the Academy Award for Best Adapted Screenplay), Mystic River, and A Nightmare on Elm Street 4: The Dream Master. Helgeland also wrote and directed 42 (2013), a biopic of Jackie Robinson, and Legend (2015), about the rise and fall of the Kray twins. more…