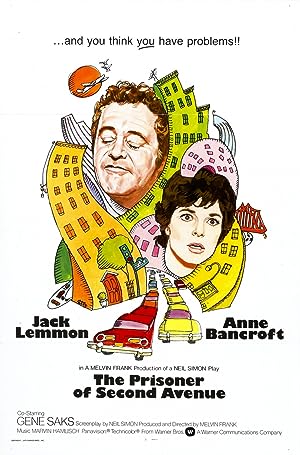 The Prisoner of Second Avenue

Synopsis: The story of Mel and Edna (Jack Lemmon and Anne Bancroft), a middle-class, middle-aged, middle-happy couple living in a Manhattan high rise apartment building. Mel loses his job, the apartment is robbed, Edna gets a job, Mel loses his mind, Edna loses her job . . . to say nothing of the more minor tribulations of nosy neighbors, helpful relatives and exact bus fares. The couple suffers indignity after indignity (some self-inflicted) and when they seem on the verge of surrender, they thumb their noses defiantly and dig the trenches for battle.
Genre: Comedy
Director(s): Melvin Frank
Actors: Jack Lemmon, Anne Bancroft, Gene Saks, Elizabeth Wilson
Production: Warner Home Video
Nominated for 1 BAFTA Film Award. Another 1 win & 1 nomination.

-l can't sleep when you're tense like this.|-l'm not tense. l'm frozen stiff.

Do you mind if l tell you something?

You were tense when you walked in|the house. You've been tense for a week.

l've seen you when you get this way.|What is it?

This building. lt's this city.

Come listen to this.|Two in the morning.

One car's driving around|in Jackson Heights. We can hear it.

Fourteen stories up, subway's louder|than in the subway.

We're like some kind of an antenna.|Sounds come up here, then out to the city.

Two in the morning.|You believe it's still going on next door?

''The beat, beat, beat of the tom-tom|as the jungle shadows fall''?

-You don't hear that?|-Not when you're talking or singing...

Every night they got somebody else.|Hockey players, basketball--

Whatever team's in town.

Win or lose, nobody loses|when they wind up there.

Every goddamn--|Somewhere there's a 747 flying around.

Marvin Neil Simon (born July 4, 1927) credited as Neil Simon, is an American playwright, screenwriter and author. He wrote more than 30 plays and nearly the same number of movie screenplays, mostly adaptations of his plays. He has received more combined Oscar and Tony nominations than any other writer.Simon grew up in New York City during the Great Depression, with his parents' financial hardships affecting their marriage, giving him a mostly unhappy and unstable childhood. He often took refuge in movie theaters where he enjoyed watching the early comedians like Charlie Chaplin. After a few years in the Army Air Force Reserve, and after graduating from high school, he began writing comedy scripts for radio and some popular early television shows. Among them were Sid Caesar's Your Show of Shows from 1950 (where he worked alongside other young writers including Carl Reiner, Mel Brooks and Selma Diamond), and The Phil Silvers Show, which ran from 1955 to 1959. He began writing his own plays beginning with Come Blow Your Horn (1961), which took him three years to complete and ran for 678 performances on Broadway. It was followed by two more successful plays, Barefoot in the Park (1963) and The Odd Couple (1965), for which he won a Tony Award. It made him a national celebrity and "the hottest new playwright on Broadway." During the 1960s to 1980s, he wrote both original screenplays and stage plays, with some films actually based on his plays. His style ranged from romantic comedy to farce to more serious dramatic comedy. Overall, he has garnered 17 Tony nominations and won three. During one season, he had four successful plays running on Broadway at the same time, and in 1983 became the only living playwright to have a New York theatre, the Neil Simon Theatre, named in his honor. more…

The Prisoner of Second Avenue