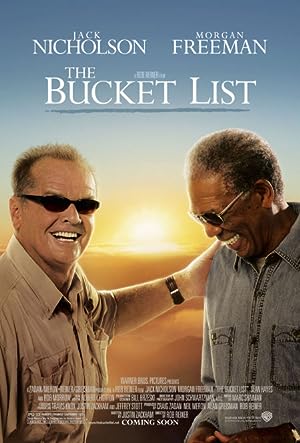 Synopsis: Corporate billionaire Edward Cole and working class mechanic Carter Chambers have nothing in common except for their terminal illnesses. While sharing a hospital room together, they decide to leave it and do all the things they have ever wanted to do before they die according to their bucket list. In the process, both of them heal each other, become unlikely friends, and ultimately find joy in life.
Genre: Adventure, Comedy, Drama
Director(s): Rob Reiner
Actors: Jack Nicholson, Morgan Freeman, Sean Hayes, Beverly Todd
Production: Warner Bros. Pictures
3 wins & 4 nominations.

You better handle it right, or heads

You tell Dr. Shit for Brains... that I wanna

know everything about that bulimia treatment...

he wants to get me on.

the congress next month

I don't wanna go there, and have to

breathe through a hole in my throat.

- Well that is not exactly what happens.

- Who the hell is this guy? Where's Thomas?

- We're gonna move you in to the bed now.

- Have I fired you lately?

- Not since the Oprah incident.

That was the first time I laid eyes on

An osbscises beginning, to be sure.

I'll be damned, if I'm gonna spend the next

You can't have your own room...

I don't give a shit after all,

I still want my own room.

It's my hospital, for Christ sake...

don't tell me, I can't have my own room.

You run hospitals, not health spas.

Two beds to a room, no exceptions.

I've never been sick before.

Ok, Dr. Albert will be here in a

minute to set you up.

Is these really your hospital?

By the morning of his surgery,

the cancer had spread so far...

throughout Edwards body, that the doctors

only gave him a 5% chance to survive.

pissed off, they've made him.

No Visitors coming to see him?

Justin Zackham is an American and British screenwriter, director and producer. He wrote the hit films The Bucket List, One Chance, and the FX series Lights Out, and The Big Wedding, which he also directed. more…