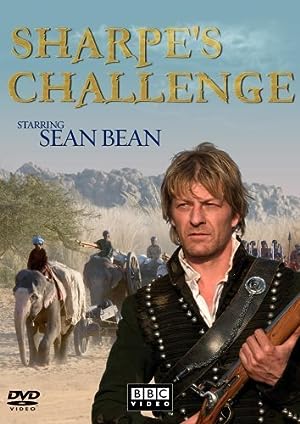 Synopsis: Sean Bean is back as the swashbuckling hero in Sharpe's Challenge, an action packed mini-series to be shot on location in Rajasthan, India. Two years after the Duke of Wellington crushes Napoleon at Waterloo, dispatches from India tell of a local Maharaja, Khande Rao, who is threatening British interests there. Wellington sends Sharpe to investigate on what turns out to be his most dangerous mission to date. When a beautiful general's daughter is kidnapped by the Indian warlord, the tension mounts, leaving Sharpe no option but to pursue the enemy right into its deadly lair. Deep in the heart of enemy territory he also has to keep at bay the beautiful but scheming Regent, Madhuvanthi, who is out to seduce him. The fate of an Empire and the life of a General's daughter lie in one man's hands...
Genre: Action, Adventure, History
Director(s): Tom Clegg
Actors: Sean Bean, Daragh O'Malley, Toby Stephens, Padma Lakshmi
Production: BBC

and a certain Irish sergeant of my acquaintance,

Now, will you take me to Wellington

or shall I dig the bugger out myself?

What's this nonsense I hear?

and become a farmer in France?

Aye. It's true enough, Your Grace.

Suits you, this life?

Well, no bugger's trying to shoot me

the livelong day so, aye, suits me.

I imagine the recent strictures placed upon you

by the late Corn Bill must prove inconvenient.

And I imagine Your Lordship didn't bring me

all this way to discuss the price of grain.

There is a young tiger loose in India, Sharpe.

A Maratha princeling with a heart for rebellion

and a taste for English blood.

I thought we'd put an end to any threat

So had we all. Divide and rule.

but one that has served us well.

While the Maratha princes fight and squabble

amongst themselves, the Company prospers.

behind a common leader however...

Khande Rao, the Rajah of Ferraghur.

I should hardly call him common, Rawlinson.

Since he came to power, attacks on our forts

and hill stations have increased tenfold.

And with each success,

more Pindari bandits come to his side.

How come this man has succeeded

where many others have failed?

he's not yet in his majority.

is ruling as regent.

Albeit one acting under advice and guidance

Our intelligence officer in Agra

supplying the Company with mounts

to discover the renegade's identity.

Alas, nothing's been seen or heard of the fellow

Bernard Cornwell, OBE (born 23 February 1944) is an English author of historical novels and a history of the Waterloo Campaign. He is best known for his novels about Napoleonic Wars rifleman Richard Sharpe. He has written historical novels primarily on English history in five series, and one series of contemporary thriller novels. A feature of his historical novels is an end note on how they match or differ from history, and what one might see at the modern site of the battles described. One series is set in the American Civil War. He wrote a nonfiction book on the battle of Waterloo, in addition to the fictional story of the famous battle in the Sharpe Series. Two of the historical novel series have been adapted for television: the Sharpe television series by ITV and The Last Kingdom by BBC. He lives in the US with his wife, alternating between Cape Cod, Massachusetts and Charleston, South Carolina. more…

Discuss this Sharpe's Challenge script with the community: