The fighter that Rocky has just defeated is drinking a beer

and joking with three other fighters... Some of the fighters

are smoking. The room is cloudy.

A short man of fifty enters. He is dressed in a sweater

buttoned over a t-shirt.

Rocky raises his head. The promoter steps over.

... Twenty bucks for the

bucks for the towel an'

shower, seven for tax -- The

The man peels off the money and departs... Rocky closes his

locker, nods to the defeated fighter, and leaves.

Rocky is on the trolley heading to South Philly... The

trolley is empty except for a thin old black WOMAN... The

Rocky exits the trolley and walks down the block... He waves

at a pair of high-heeled hookers and they wave back.

Rocky passes a sleeping wino curled in front of a dirty

bookstore. Rocky drags the man into a protective passageway.

Further down the street, Rocky pauses in front of the

"ANIMAL TOWN PET SHOP"... He peers into the dark store and

sees a sad, huge dog sitting in the window. He mumbles to

the dog and continues to the corner.

A short while later, Rocky approaches his apartment located

in the most deprived section of South Philly. He kicks away

the litter that has gathered against the apartment steps and

The narrow hallway is painted olive brown. A single light

Rocky enters. The one-room apartment is drab, with a

curling boxing poster of Rocky Marciano tacked on the wall...

Nailed against the far wall is a mattress. The mattress is

used as a punching bag. Stuffing spills out of the center. 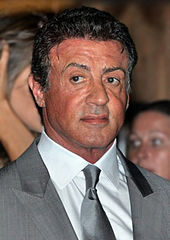