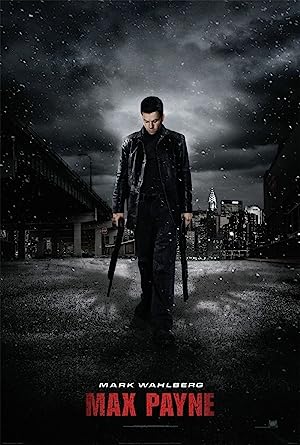 Synopsis: Three years ago, NYPD detective Max Payne's wife and baby were murdered. Max gets himself transferred to the cold case office where he can continue searching for the killer who got away. He's a loner, but two people reach out to him during a fateful week: Alex, his ex-partner who may have found a clue, and BB, the security chief at the pharmaceutical company where Max's wife worked. Meanwhile, bodies are piling up, some as a result of a drug on the street that is highly addictive and, for many who take it, brings hideous hallucinations. When one of the bodies is a woman Payne was the last to see alive, her sister comes looking for him armed to the teeth; Max must move fast.
Genre: Action, Crime, Drama
Director(s): John Moore
Actors: Mark Wahlberg, Mila Kunis, Beau Bridges, Ludacris
Production: 20th Century Fox
1 nomination.

I don't believe in heaven.

I believe in pain.

I believe in fear.

I believe in death.

There's an army of bodies under this river.

Criminals. People who ran out of time.

Next time they drag this river

they will find me on the bottom with the rest of them.

And there won't be anyone left to say I was different.

I could feel the dead down there.

Just below my feet.

Reaching up to welcome me as one of their own.

It was an easy mistake to make.

All the cold investigations in the city are collected up

and delivered over here to us.

And we call each of the witnesses

to see if they have anything to add to their original statements.

And if they can't?

Then we send the file back to the original precinct for follow-up.

Don't get your hopes up though.

This is the cold case office.

Once you've been through the file and come up empty, you bring it here.

Max here handles all our files.

If it hits his desk, the case is officially dead.

So what if there's no phone number for a witness?

- Should I do a follow-up in person?

I don't understand. Then how...

How am I supposed to solve the unsolvable murder mystery and redeem myself?

Alright, trust me! There's a tragic story behind

why I'm standing here giving you this tour.

We all did something, so just save it.

What do you say, we grab a beer after work or something?

His wife and kid were murdered.

They never found the guy. That's the story.

Remember when you were a kid

and you'd hold your breath when you went past the graveyard?

Kinda reminds me of the one I lost.

Ask Doug. He was there with you.

I'm only following you.

Oh hell no. You a cop or something?

Now go get my watch!

Come on, Doug. Come get his watch!

I guess this ain't your lucky day, now is it?

Have you ever seen this woman?

You got busted robbing a house in New Jersey

with William Preston six months ago.

Why the hell do you think I'm talking to you?

Did you ever hear anyone say anything about this woman?

Bill died because their wings couldn't lift him up.

No, he got shot robbing a liquor store.

What are you talking about?

Their wings are golden, the feathers only look black...

William Preston was a dead end.

I am done helping you, Max.

I paid my debt to society, you know.

- What's going on in there?

I'm a little offended I didn't get my invitation.

Well, I didn't send out invitations...

Doug only wanted to talk about birds or something. He was a whack job.

I told you I don't know those kinds of people now.

This is a dinner party. Alright, these are my friends.

Listen! If you don't give me a new name, I'm gonna start frisking everyone of your friends.

Three years on the street is a lifetime, man.

Whoever you're looking for, there's no way they are still out there.

If you tried sleeping once in a while, you could see that for yourself.