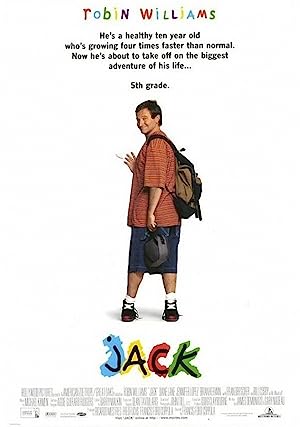 Synopsis: The movie is about a boy with a unique aging disorder: one that makes him age 4 times faster than normal. It picks up when Jack (Robin Williams) is 10 years old, but looks 40. He tries to go to public school for the first time, and to become friends with kids his own age. His physical appearance causes him lots of problems, however.
Genre: Comedy, Drama, Fantasy
Director(s): Francis Ford Coppola
Actors: Robin Williams, Diane Lane, Brian Kerwin, Jennifer Lopez
Production: Hollywood Pictures
6 nominations.

This is Dr Lin. He's an|infant disorder specialist from Cornell.

I want to assure you both that|there is nothing debilitating|about your son's condition.

alert and quite happy.

However, his cells are|developing at what we feel...

is four times the normal rate.

Even though your son was only|ten weeks old when he was born...

physically he was nine months|and ready to leave your womb.

Nature has given us all|an internal clock.

It meters out lifespan,|controls our growth.

seems to be ticking|faster than usual.

Well, quite frankly,|neither have we.

There are other aging syndromes|that we know of.

Progeria, for example, which is|very devastating to the child, but--

Jack's cells are replicating|at an unheard of rate.

Is he gonna age like this|the rest of his life?

your son may be physically|around age four.

And if this continues|throughout his life...

by the time he reaches|age ten, well, he could--

That's where he lives, right|down the street my whole life...

and I didn't even know about it.

I don't believe any of it.|He's lying.

Yeah. He's not a monster.|There's no such thing.

All hairy and everything.|He's like a freak or something.

You didn't see it. His mom wouldn't|let him see it 'cause he has nightmares.

Discuss this Jack script with the community: