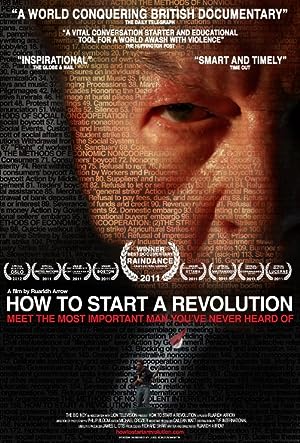 How to Start a Revolution

Synopsis: HOW TO START A REVOLUTION is the remarkable untold story of Nobel Peace Prize nominee Gene Sharp, the world's leading expert on non-violent revolution. This new film (from first time director Ruaridh Arrow) reveals how Gene's work has given a new generation of revolutionary leaders the weapons needed to overthrow dictators. It shows how his 198 steps to non-violent regime change have inspired uprisings from Serbia to Ukraine and from Egypt to Syria and how his work has spread across the globe in an unstoppable wave of profound democratic change. How To Start A Revolution is the story of the power of people to change their world, the modern revolution and the man behind it all.
Genre: Biography, Documentary, News
Director(s): Ruaridh Arrow
Actors: Robert Helvey, Jamila Raqib, Gene Sharp
Production: 7th art
1 win.

In 2011, the Arab Spring Revolutions

swept across the Middle East;

from Tunisia to Egypt, Bahrain, and Syria.

For more than 50 years, a quiet American scholar

has been helping people

bring down their dictators.

His tactics of nonviolent resistance have been used

in revolutions from Serbia to Ukraine and Iran.

To be counted as a threat to a tyrant

is a matter of pride, I would say.

It means were effective.

It means were relevant.

This is the story of the power

of people to change their world,

and the man behind it all.

Gene Sharps tactics and theories are being

practiced on the streets of Syria as we speak now.

My name is Gene Sharp,

and this is the work I do.

How To Start A Revolution

How would you describe your work?

Primarily, I try to understand

the nature and potential of

This is a technique of combat.

It is a substitute for war,

His handbook to revolution

From Dictatorship to Democracy

has been smuggled across borders and

downloaded hundreds of thousands of times.

We dont know quite how its read,

but it certainly did into 30 some

languages in different parts of the world,

on all continents except Antarctica.

The hallmarks of Gene Sharp's work can be

seen in revolutions all over the world.

and commitment to nonviolent action

There seems to have been

These specific forms of

Exactly the counterpart of military,

Unless they have something

instead of violence and war,

they will go back with violence and war

to spread the knowledge

For years, people living under dictatorships

have been coming here to East Boston for help.

Jamila Raqib has worked for

Gene for more than 10 years.

I began learning about the

work at a very basic level.

I did most of my reading and learning as

soon as I started working at the institution

and I was hooked.

I didnt start out to do this.

I had a religious background that

led me to want to leave the world in a bit

of a better place and better condition

than when I came here,

and how to do that was always a problem.

conscription to fight in the Korean War.

I had a two-year sentence.

I did nine months and ten days.

In those days you counted the

days as well as the month,

but I dont think that my action

there did any good whatsoever.

It was just to keep my sense of my own integrity

so I would carry on in the work that

I thought was really important.

but I wrote to him.

I dont know how I got his address.

I said:
Well, Im about to do

such and such and go to prison,

but by the way Ive written this book on Gandhi

three quite different cases from each other

struggle for a greater freedom

And he wrote back that he was very

much hoped, but couldnt know

that he would have made the same decision I did

and he would be willing to look at the manuscript

Ruaridh Arrow is a British journalist and film-maker known for his 2011 feature documentary How to Start a Revolution about Nobel Peace Prize nominee Dr Gene Sharp. The film was described as an underground hit with the Occupy movement, which launched around the time of the film's release in September 2011. In 2012 the film won a BAFTA Scotland New Talent Award in the 'Factual: Over 30 Minutes' category. How to Start a Revolution won Best Documentary at the 2011 Raindance Film Festival in London. It was funded by Arrow and via the crowdfunding site Kickstarter.Educated at King's College London and Glasgow University, Arrow was named Sky News Student Reporter of the Year at the Guardian Student Media Awards in 2004. more…