Synopsis: "Rose" is the opening episode of the first series of the revived British science fiction television programme Doctor Who. The episode was directed by Keith Boak and written by Russell T Davies who was also one of the three executive producers. It was first broadcast in the UK on BBC One on 26 March 2005. "Rose" was the first Doctor Who episode to air since the Doctor Who television film in 1996.
Genre: Sci-Fi
Collection  Edit  Watch  PDF  Buy

(He shuts the door behind him, then opens it again.)

I'm the Doctor, by the way. What's your name?

Nice to meet you, Rose. Run for your life!

(Rose makes her way to the main road, nervous of the dummies in the shop window. She runs across the road, nearly becoming a hood ornament for a black cab.)

(KaBOOM! A huge fireball takes out the upper floor of Hendrik's. Rose runs straight past an out of date police telephone box parked just in the alley between two other stores.)

The whole of Central London has been closed off as police investigate the fire. Early reports indicate

(Jackie is on the telephone and Rose is slumped on the settee.)

I know. It's on the telly. It's everywhere. She's lucky to be alive. Honestly, it's aged her. Skin like an old bible. Walking in now you'd think I was her daughter. Oh, and here's himself.

I've been phoning your mobile. You could've been dead. It's on the news and everything. I can't believe that your shop went up!

What was it though? What caused it?

I wasn't in the shop. I was outside. I didn't see anything.

It's Debbie on the end. She knows a man on the Mirror. Five hundred quid for an interview.

Oh that's brilliant! Give it here.

(Rose takes the phone from Jackie and ends the call.) 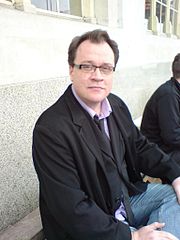 Stephen Russell Davies, OBE (born 27 April 1963), better known as Russell T Davies, is a Welsh screenwriter and television producer whose works include Queer as Folk, Bob & Rose, The Second Coming, Casanova, the 2005 revival of the classic British science fiction series Doctor Who, and the trilogy Cucumber, Tofu, and Banana. more…

Discuss this Doctor Who Rose script with the community: