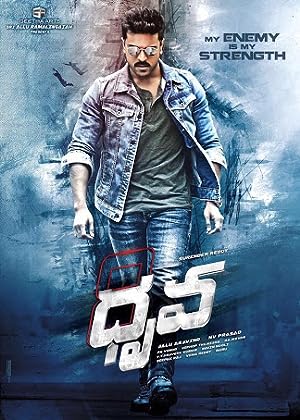 Synopsis: Dhruva is an upcoming Action Thriller film directed by Surender Reddy and produced by Allu Aravind under his banner Geetha Arts. It features Ram Charan, Rakul Preet Singh and Aravind Swamy. It is an official remake of the Tamil film Thani Oruvan (2015). The film will feature music by Hiphop Tamizha, who composed for the Tamil original. and cinematography is handled by P. S. Vinod. The film was launched on 18 February 2016 and principal photography commenced on 22 February 2016. The film, initially set for release on 7 October, is scheduled for a worldwide release on 2 December 2016.
Genre: Action, Thriller
Director(s): Surrender Reddy
Actors: Ram Charan, Arvind Swamy, Rakul Preet Singh, Sourav Chakraborty

Do not be afraid sister, my husband will free you too

Its me your wife, Vasundari

Someone took me and our son as hostage

Do not be afraid I'll send my brother to save you

What happened to all those words? Are not you worried about

Ammalu! They took you hostage too?

- Ammalu?! Does that mean this is that girl?! I'll show

Call me that again and I'll peel your skin

From there you are half a kilometer away

Turn right from there, a little ahead

Go left to the train station

There will be a general store called Anitta Shop

From there get me a 1 litre bottle of water, better be super cold

Why would you kidnap for a bottle of water??

-Yeah, along with the water, bring the four children you took hostage

Take the train to Williams

I tell you where to get off

Put it on speaker

Listen, at the next station get off with just the kids and

Wait! Theres two families of mine as hostages

Pull the chain once you leave the station and walk back

Why you squeezing the bottle?

Throw me the bottle

Where is my family?

- I dropped them off before

With your men in the same train as yours

Thanks to some annonymous student tips the police

arrested the kidnappers at the train station

The kids have returned safely to their families and

the police are thankful to the students

Shivgopal Krishna (Tamil: சிவகோபால் கிருஷ்ணா, Hindi: शिवगोपाल कृष्णा; Srinivasan Shivgopal Krishna, born 8 April 1984) is an Indian film writer and director. He is also known mononymously as Shivgopal and as Krishna in the South. He is best known in the Telugu film industry for his debutant written film Bank (2008). Recently he is working on a Hindi film script and planning to direct himself. more…