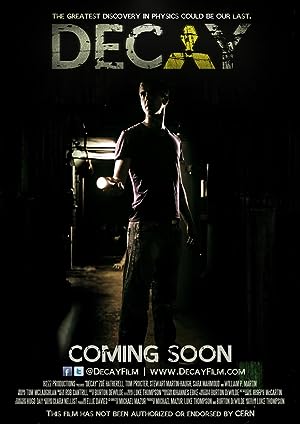 Synopsis: A group of PhD students who work at the Large Hadron Collider (LHC) at CERN find themselves in an emergency situation as a result of a problem with the accelerator. The maintenance crew have been transformed into zombies after the particle accelerator malfunctions. The students must try to evade the zombies while running through CERN's maintenance tunnels.
Genre: Horror
Director(s): Luke Thompson, Michael Mazur (co-director)
Actors: Zoë Hatherell, Tom Procter, Stewart Martin-Haugh, William P. Martin

Well, we'll deal with that later if we need to.

Anyway, I have to prepare my team for going in the tunnels and look over Lisa's talk

so I'll talk to you later.

Everyone, this is my girlfriend Kate. Kate, this is Matt and Connor

and my sister Amy.

Nice to finally meet you.

Mom let it slip. I was waiting for you to tell me!

It's nice to finally meet you as well.

Are you coming with us?

So uh, why have you thrown away your evening away to go on shift?

James was gonna come meet me for dinner but then he told me that you guys had to uh...

And how did James manage to convince you that

vending machine food was going to be an acceptable substitute?

Shift can sometimes be boring, are you going to be okay?

Yeah, but he works on the accelerator. The rest of us analyse the data.

I hope you're not claustrophobic, it's a long way down.

Guys, I've thought of a joke.

So a chimpanzee and a sloth...

And then the chimpanzee's like, "Stop it, stop it!"

Do you want to watch "A Clockwork Orange"?

I borrowed it from Amy.

That's a pretty deep film for a lowly engineer like yourself.

You shouldn't let him talk to you like that.

He's only messing around.

So the accelerator boosts the beam of protons to almost the speed of light.

And then we collide them... here.

Discuss this Decay script with the community: