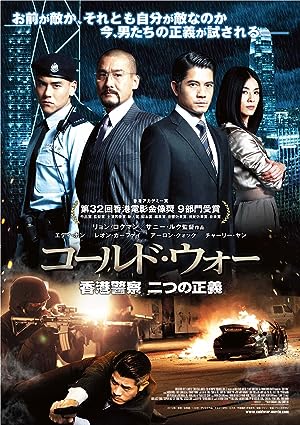 the Mongkok bomb and the hijacked van

as they happened around the same time.

I activated the Emergency Response System

and this is the Provisional Command Centre.

To, you're the Director of IT.

I want you to explain

Lee, as the Supervisory Boad and computer section heads

let me answer for...

I am asking about the technical stuff

Can you five an answer?

Given today's technology and resources,

the hijackers can only block a channel,

no one knows what frequency we use.

It's simple. We'll check with the Broadcasting Authority

to see where TV and radio signals

in New Territories South had interference.

We can then locate where the hijacking took place.

Our budget was cut,

over six years for

The Commissioner is in Copenhagen right now

boasting about how safe Hongkong is,

how professional the police is.

How could we imagine this ridiculous system

would let a whole team and a police van

vanished without a trace?

I could draw conclusions now.

First, there's a mole in the force.

Second, there's a serious loophole in our communications system.

It's your department's responsibility, To.

According to the armoury's records,

Five officers were on board.

And sitting in the rear seat is

I'm treating this as a terrorist indicent.

The operation code is Cold War.