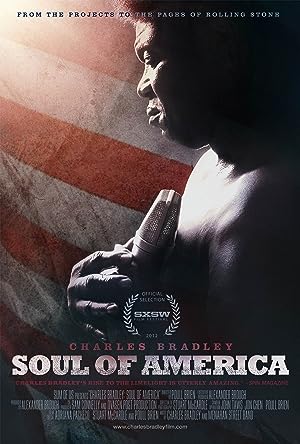 Synopsis: Starting off on his 62nd birthday, Charles Bradley: Soul of America follows the extraordinary journey of singer Charles Bradley during the electrifying and transformative months leading up to the release of his debut album "No Time for Dreaming." The 74-minute documentary feature will premiere at the SXSW 2012 Film Festival in Austin, Texas. Despite being abandoned as a child, a period of homelessness, the devastating loss of his brother and constant poverty, Charles never gave up on his life long dream to be a professional singer. With the help of producer and Grammy-winner Gabriel Roth (Daptone Records) and musician Tommy Brenneck, Charles moved away from the James Brown covers he'd been performing for nearly half a century and focused on finding his own unique voice. Earning himself an opening spot on tour for Sharon Jones, the biggest artist in the Daptone stable, Charles delivered the most impassioned performances of his life. Coming up during one of the worst economic downturns i
Genre: Biography, Documentary, Music
Director(s): Poull Brien
Actors: Charles Bradley, Alex Everett, Sharon Jones, Jonny Santos
Production: Sum Of Us
2 nominations.

I asked myself why it took so long, but you can't question God when he wants to do things.

So, at my late age, it just started coming.

- What's next? Are you thinking big?

- I'm thinking the sky's the limit.

Congratulations on this great record. No matter what happens with it, it's a fine piece of work.

# Going up in flames

and released their debut record. He may be the first.

The guy is just getting it going as far as I'm concerned.

I hope that enough people can hear him sing,

so he can make the kind of life he wants and take care of his family.

If you're into funk and soul music or Afrobeat and you live in New York,

Gabe Roth is the guy you want behind the board. You want these guys pushing you in the direction

because their records were phenomenal.

I just started making the kind of records I like listening to.

I think a lot of those soul records have a certain sincerity that I always like.

One morning, pretty early, nine or ten in the morning, I got a knock on my door and it was Charles.

I had no idea what he was talking about, so he shows me a videotape

Gabe Roth from Daptone Records brought him down to a rehearsal in Staten Island.

Gabe wanted us to record with a singer. Charles was a singer they hadn't found a band with on Daptone.

Charles had captured their attention.

I just figured, see how Charles works with them.

Discuss this Charles Bradley: Soul of America script with the community: