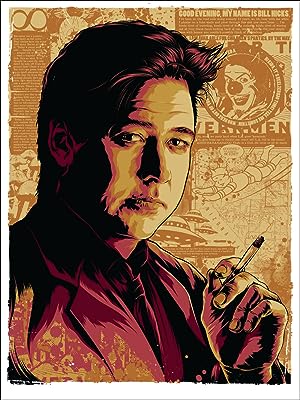 We were raised Southern Baptist

and had to go to church every single Sunday.

It was just a strict household.

I always wanted to get straight,

cos a lot of times it talks about, "The Hickses

"No, we were raised Southern Baptist

and that's much worse. "

That's just the way we lived then.

But hopefully what you're taught there

teaches you the spiritual,

and I don't mean religion.

I mean the basics of how to live a life.

I was like, "Get me out of this house.

And off I went to college.

I rebelled. Steve, in his fashion, rebelled.

And Bill rebelled too.

Stand-up comedy was not on

But we were very determined

and so we started to do

this very much guerilla-theatre type

of comedy amongst our friends.

This group of people's just standing around,

and you do an outrageous sketch

and then you disappear.

What the hell was that?

And, of course, once they got wind of it,

they wouldn't let us alone.

"Are you guys gonna do your thing?"

After school we would go over to his house

and we would plan them and write them

And it wasn't lost upon us, the fact

that we already knew what we wanted in life.

This was what we were going to do.

You had to sacrifice your family,

your relationship with girls,

your popularity at school.

We were sacrificing everything for this.

And there was nowhere to do our craft.

There was no open mics.

There was nothing in 1970s Houston, Texas.

As a backdrop to all this

is how we met Kevin Booth.

Bill and I just thought

that Kevin was hilarious,

just cos he was this technical genius