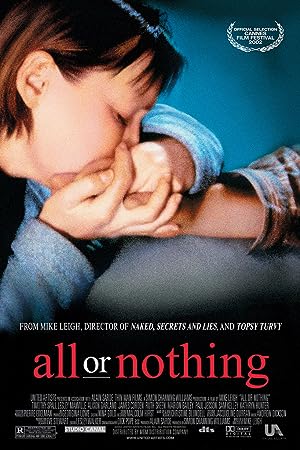 Synopsis: Penny's love for her partner, taxi-driver Phil, has run dry. He is a gentle, philosophical guy, and she works on the checkout at a supermarket. Their daughter Rachel cleans in a home for elderly people, and their son Rory is unemployed and aggressive. The joy has gone out of Phil's and Penny's life, but when an unexpected tragedy occurs, they are brought together to rediscover their love. All or Nothing is set on a London working-class housing estate over a long weekend, and also tells the stories of a range of Phil and Penny's neighbors, some of whom become involved in the family's lives, and all of whom experience an emotional journey.
Genre: Drama
Director(s): Mike Leigh
Actors: Alison Garland, Jean Ainslie, Timothy Spall, Badi Uzzaman
Production: MGM Distribution Company
3 wins & 13 nominations.

No, it's all right.|They're long life.

What have they got in 'em?

Picked a bloke up|from the cash and carry.

He was trying to get a refund.|They wouldn't have it.

He bought them for a barbecue.|No one turned up.

We'll have to get|some burgers, then.

What have you been up to|today, then?

Rory, will you stop|swearing at me, please?

You been clumping people again?

Don't listen to her.|She don't know nothing about it.

It's 'cause|he ain't got nothing to do.

Shut up! He was asking for it.

I ain't looking for trouble!|I ain't done nothing!

When you gonna take him|up the job center?

It ain't got nothing|to do with you!

Stop going on about it!

Rory, calm down.|Nobody's having a go at you.

I'm just trying to help you.

Yeah. Rory, can you put|your plate on the table, please?

Picked up at a doctor's|surgery at dinner time.

Yeah. Only wanted to go|to the next street.

You shouldn't have|charged him nothing.

No, you should have|called it nothing.

He wasn't having it,|you know?

You didn't have to take it,|though, did you?

No price on that|when you're old.

Ron's had a bump.

Mike Leigh (born 20 February 1943) is an English writer and director of film and theatre. He studied at the Royal Academy of Dramatic Art (RADA) before honing his directing skills at East 15 Acting School and further at the Camberwell School of Art and the Central School of Art and Design. He began as a theatre director and playwright in the mid-1960s. In the 1970s and 1980s his career moved between theatre work and making films for BBC Television, many of which were characterised by a gritty "kitchen sink realism" style. His well-known films include the comedy-dramas Life is Sweet (1990) and Career Girls (1997), the Gilbert and Sullivan biographical film Topsy-Turvy (1999), and the bleak working-class drama All or Nothing (2002). His most notable works are the black comedy-drama Naked (1993), for which he won the Best Director Award at Cannes, the Oscar-nominated, BAFTA and Palme d'Or-winning drama Secrets & Lies (1996), the Golden Lion winning working-class drama Vera Drake (2004), and the Palme d'Or nominated biopic Mr. Turner (2014). Some of his notable stage plays include Smelling A Rat, It's A Great Big Shame, Greek Tragedy, Goose-Pimples, Ecstasy, and Abigail's Party.Leigh is known for his lengthy rehearsal and improvisation techniques with actors to build characters and narrative for his films. His purpose is to capture reality and present "emotional, subjective, intuitive, instinctive, vulnerable films." His aesthetic has been compared to the sensibility of the Japanese director Yasujirō Ozu. His films and stage plays, according to critic Michael Coveney, "comprise a distinctive, homogenous body of work which stands comparison with anyone's in the British theatre and cinema over the same period." Coveney further noted Leigh's role in helping to create stars – Liz Smith in Hard Labour, Alison Steadman in Abigail's Party, Brenda Blethyn in Grown-Ups, Antony Sher in Goose-Pimples, Gary Oldman and Tim Roth in Meantime, Jane Horrocks in Life is Sweet, David Thewlis in Naked—and remarked that the list of actors who have worked with him over the years—including Paul Jesson, Phil Daniels, Lindsay Duncan, Lesley Sharp, Kathy Burke, Stephen Rea, Julie Walters – "comprises an impressive, almost representative, nucleus of outstanding British acting talent." Ian Buruma, writing in The New York Review of Books in January 1994, noted: "It is hard to get on a London bus or listen to the people at the next table in a cafeteria without thinking of Mike Leigh. Like other wholly original artists, he has staked out his own territory. Leigh's London is as distinctive as Fellini's Rome or Ozu's Tokyo." more…

Discuss this All or Nothing script with the community: