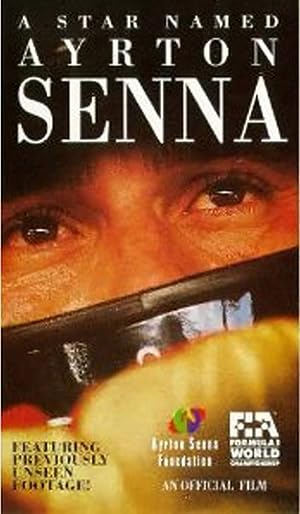 Synopsis: The Official Film of Brazil's greatest Formula One driver, Ayrton Senna, who's sudden death in the 1994 San Marino Grand Prix sent shock waves around the World. It cemented his reputation both within the sport, and his native Brazil, as a legend. The film looks at his life and career using archive footage and featuring revealing interviews with the man, as well as those who knew him well; friends, family and competitors. It also shows how the Ayrton Senna Foundation, set up in his honor, is working to help under privileged and street-bound children in his native Brazil using sport as an incentive to learn.
Genre: Biography, Documentary, Sport
Director(s): Jean Claude Guiter
Actors: Jean Alesi, Martin Brundle, Juan Manuel Fangio, Alain Prost

to give the trophy away...

and I should've still been in hospital

because of a heart problem I had.

But when I got on to the podium,

I forgot about being ill, I felt 18 again.

To see the happy face he's got.

His roots were firmly grounded in

the steel-making city of So Paulo...

the industrial heartland of Brazil.

Here, amid the energy and bustle

on the car track at Interlagos.

And began a collection of trophies

that would be cherished by his family.

Ayrton was a very determined man.

He knew exactly what he wanted and

he would go at it till he achieved it.

He was very persistent. When he was

a kid people used to call him stubborn.

Because he would go to the limit

to get what he wanted.

As a child, I remember he was always

training in his go-cart.

He used to travel

to different the carting competitions.

We were always very curious to hear

how he had done at the competition.

And every year his results

in car racing. As far as I remember

he was always involved in carting.

Before long, cart races in Brazil

and all around the world...

became all too aware

of the driver in the yellow helmet.

I met Ayrton when he was kid

driving in the carting races.

I was already painting helmets for

and for Nelson Piquet. Ayrton also

wanted to have an identity of his own.

I decided to give him a warm color and

I made his yellow

with two blue and green stripes...

coming out of his eyes to suggest

movement and aggression as well.

I decided to use the colors of our

Ayrton loved the design and it became