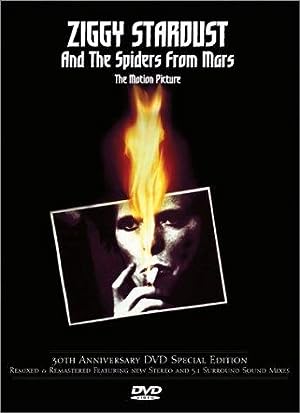 Ziggy Stardust and the Spiders from Mars

Synopsis: The July 3rd, 1973 historic concert of the 'leper Messiah'. This was to be David Bowie's last concert with the Ziggy persona and the Spiders from Mars. A great medley of 'Wild Eyed Boy From Freecloud'/'All The Young Dudes'/'Oh! You Pretty Things', a Lou Reed cover, and a Rolling Stones cover are but some of the highlights.
Genre: Documentary, Music
Director(s): D.A. Pennebaker
Actors: David Bowie, Mick Ronson, Trevor Bolder, Mick Woodmansey
Production: 20th Century Fox Film Corporat

I've got a telex here for Tony from Jerry. I don't know if you've seen it at all.

- It's a very long involved one.

It's all in code.

I didn't know we did business in code.

Can't understand a word of this.

including the United States of America, Japan. Now, his home country.

For the last time - David Bowie!

AUDIENCE CLAPS ALONG TO ORGAN MUSIC

My mother saw her first spaceship in that.

- Oh, you look beautiful, darling. I love that.

- So anyway, are you all right?

- There's an awful lot of Rolls-Royces out there, darling.

Tony loved it, he made the driver go by slowly.

- Just people... Being surrounded and recognised and fans going nuts.

I don't know. I just saw the Rolls-Royces lined up. It's fabulous!

Ah, you guys, you look very nice and I just came to say hello.

- It's cos I'm watching you, you see. I'm learning from you.

But I like the idea of the blue lines with the pink lipstick. That's quite good.

- You see how they pick on me and make me feel terrible?

- You're a girl. What do you know about make-up?

Exactly! That's what I say all the time(!)

Make-up for a night out on the town, with the boys.

HE WHISTLES ALONG TO ORGAN MUSIC

No, I haven't. Oh, what happened to it then?

INTRO:
"Hang Onto Yourself"

# Well she's a tongue twisting storm, she will come to the show tonight praying to the light machine

# So come on, come on, we've really got a good thing going

# Well come on, well come on, if you think we're gonna make it You better hang on to yourself

# Now we don't dance much we just wanna play

# You know the bitter comes out better on a stolen guitar

# You're the blessed we're The Spiders from Mars

# So come on, come on we've really got a good thing going on

# Well come on, come on if you think you're gonna make it You better hang on to yourself

# So come on, we've really got a good thing going on

# Come on, come on, if you think we're gonna make it You better hang on to yourself

# And The Spiders from Mars He played it left hand

# Ziggy really sang, screwed-up eyes and screwed-down hairdo like some cat from Japan

The writer of this script is unknown. more…

Ziggy Stardust and the Spiders from Mars