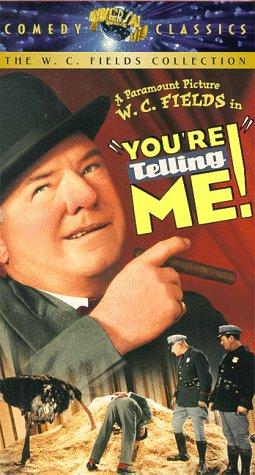 Synopsis: Sam Bisbee is an inventor whose works (e.g., a keyhole finder for drunks) have brought him only poverty. His daughter is in love with the son of the town snob. Events conspire to ruin his bullet-proof tire just as success seems near. Another of his inventions prohibits him from committing suicide, so Sam decides to go on living..
Genre: Comedy
Director(s): Erle C. Kenton
Actors: W.C. Fields, Joan Marsh, Buster Crabbe, Adrienne Ames
Production: Paramount Pictures

Is that you, Samuel?

Is the dinner | on the table, dear?

On the table and off,

It's only the shank | of the evening.

We will now give you the | correct time. Half past eight.

When you hear the sound of | the gong, it will be exactly...

Where have you been?

Don't answer! I know | what you're going to say.

"Down at the shop, | working on an invention. "

If you was married | to Thomas Edison...

You're no Edison, | Sam Bisbee.

If you've no regard for me,

you might at least have some regard | for your daughter's happiness.

My daughter's the happiest | little girl in the world.

Her silvery laughter rings out | from early morn

Take those shoes | off the table.

Who was putting them | on the table?

Where is she now? | What's she doing?

I don't have to worry | about my daughter.

She wouldn't be out if she wasn't | ashamed of her home, ashamed of you.

Suppose she were entertaining | a nice young man in her home,

with your shoes off, | your suspenders down,

and your breath | smelling of cheap liquor.

My daughter ashamed | of my suspenders?

There she is now | with that Bob Murchison,

Kissing him. | Kissing who?

Girls will be girls.

When I was a little boy, | I used to kiss little girls.

A rich man's son making | a fool of your daughter,

and you stand there.

No rich man's son will ever make | a fool of Sam Bisbee's daughter.

There. There they are, right in my hand.

I know how to solve | our problem.

You won't elope with me?

You won't let me | elope with you?

Twenty years married to a man | like you is enough for any woman...

Give him a rest, Mom.

What do you mean by staying | out the middle of the...

The middle of half past eight? Who, me?

Yes, you. Running | around with that clown.

Hey, you left your gadget | on the doorknob.

He doesn't seem to think so.

He just asked me | to marry him.

He really wants to | marry you? Well, why not?

I'm young and healthy and | full of the devil. Pauline!

Sure, | my little daughter

doesn't have to be in a | hurry to marry any man.

Once you're married, | it's just like being in jail.

Don't get tangled up | in that thing again.

I won't get tangled up | in nothing.

It's worse than flypaper.

Might as well have some flypaper | curtains in the house as that...

You know, Charlie, | I've been thinking about...

That's another | of my inventions.