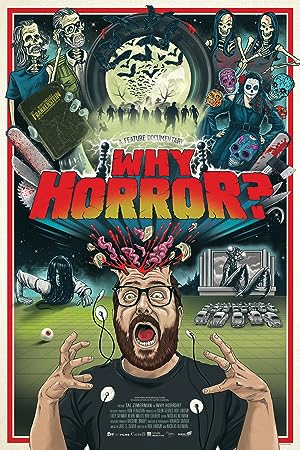 Synopsis: WHY Horror? is a feature length documentary following horror fan Tal Zimerman as he looks at the psychology of horror around the world in order to understand why we love to be scared. Horror is a global phenomenon. Millions of people love it, yet horror fans are often misunderstood. Tal Zimerman should know. He's one of them. Tal goes on a journey around the world to understand why people thrive on on blood and guts found in movies, books and video games. He meets with the genre's leading filmmakers, writers, actors and psychologists to discover how horror looks in different cultures, why it's so popular and how it affects our minds. Tal wants to know - WHY Horror?
Genre: Biography, Documentary, Horror
Director(s): Nicolas Kleiman, Rob Lindsay
Actors: Alexandre Aja, Chris Alexander, Dave Alexander, Simon Barrett

Fear is part of our DNA.

We are born with an

We have to avoid what scares us but

if we don't know what scares us,

you won't be able to escape from it.

to tell how crazy we are.

we do with a horror film.

Goya is fantastic. Goya was the first one.

Goya was the first one of us.

Really, the day of the dead

celebrates a festive cycle related to

the production, the life

and death, of corn.

And it's the time of abundance, when

you can give back to your ancestors.

Since they've been helping you from

the ground, because they are buried.

And it's said that in Xochimilco

we don't bury men, we sow them.

National culture has been

And by these images that are not

necessarily part of our culture.

They make it sinister when it isn't.

Nobody would find it logical that you would give

an offering to a being that is here to hurt you.

So there is this pressure that says Day of

Dead is to be frightened or to be scared.

So by watching horror films they can vicariously

experience it and feel excitement and catharsis.

I'm not the type, but for people with

sadistic urges it can provide a release.

both originally began as

In order to make the elements of

the characters on the stage are

presented in a fixed figure or form.

Most of the time, ghosts

appear in a white kimono.

They represent the darkness

that we carry inside.

What humans are most afraid of is nature.

Natural phenomena. Such as the dark or snakes.

Women are not able to express themselves

meaning they have all these negative

feelings swirling inside, which is scary.

And then when they die in that state, even after

they die, their grudgeful spirit remains.

when you kill something

there will be karmic retribution.

Horror has perhaps been used to

teach this concept of retribution.

That type of spirit has endured as one of

the most frightening things

called "The Ring" was released in cinemas.

I heard that when "The Exorcist"

was released in the US,

it caused panic at the theatres.

The same kind of thing happened when

"The Ring" was released

Evil Dead is a movie you

have to watch with friends.

better in video than in the theatre.

You get a VHS. A bad quality VHS.

Put it on the TV, lots

All of that together becomes a party.

There's nothing more fun than

Initially when I was developing

there wasn't much of a puzzle

solving element to it.

In the early stages the game was a

In thinking of the world of

the game, I wanted to include

puzzle-solving elements. By doing that

we tried to expand and enhance the

Fear is not necessarily

a bad thing, I think.

I believe that it is good to know

the existence of scary things.

Why are scary things considered to be bad?

from hurting or cheating people.

Horror stories used to be a

People learned about the wide scope

of this world through horror stories.

Discuss this Why Horror? script with the community: