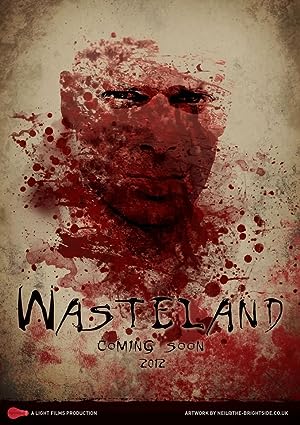 Synopsis: Wasteland is set in a world ravaged by a deadly virus and within that world is Scott Miller, a man who, against the odds, is trying to carve out some sort of life. The deadly infection that has ravaged the globe has almost totally wiped out the human race and Scott must spend his days finding water, food etc. Whilst trying to find uninfected people by radio, he must also avoid the many dangers that lurk in the outside world, while he waits for the return of the love of his life, Beth.
Genre: Drama, Horror
Director(s): Tom Wadlow
Actors: Shameer Seepersand, Jessica Messenger, Mark Drake, Rachel Benson

All right, then, son, why don't you tell me your name?

- You already know my name.

- I'd like you to tell me what it is anyway.

- It's for their benefit.

- My name is Harvey Miller.

- What's your date of birth, Harvey?

- What do you wish you were, Harvey?

- Harvey, I want you to do something for me.

I want you to tell me what you're doing sat

in front of me, bleeding and under arrest.

Where shall I start?

I do hope you don't miss out the bit

where a mutual acquaintance of ours

finds himself being wheeled into an intensive care unit.

- What makes you think I know him?

- Statements of about 30 eye witnesses.

I knew I should have been a little less conspicuous.

You can joke about it if you like, Harvey.

But this is a serious situation.

Now, I can tell by the state of your face

that you didn't launch a surprise attack on Mr Roper.

At least, if you did, it wasn't very successful.

Given his track record,

you may well have acted in self-defence,

but he's the one in hospital.

And if he doesn't wake up,

you're gonna be in a lot of trouble.

And if he does wake up and he's more convincing than you,

you're still gonna be in a lot of trouble.

You've only been out a matter of weeks, Harvey.

You're not gonna be the golden boy

in any court in England.

There'll be no probation with 12 months off

for good behaviour this time round.

So if I consider you to be soliciting lies

or acting in an uncooperative manner,

it will be construed as a violation of your probation

and I'll return you to prison tonight.

Do you understand what I'm telling you, Harvey?

Be sure not to leave anything out, then, won't you?

If you really want a full picture,

we're gonna be here a while.

You have my undivided attention

for the rest of the night.

Got my papers last night, didn't get chance to phone.

Listen, mate, I need a lift.

I ain't got enough money for the train.

I'll go to the station,

wait outside till three. If you haven't...

You've either been let out of prison

or kicked out the army.

You all right, Demps?

Not bad, Harvey, not bad.

- Can't believe it's been six months.

- Can't have missed you very much, then.

Didn't think I'd recognise you

seeing as you gave us all the f*ck off.

Nothing for a year, then a phone call asking for a lift.

You know how it is, Demps.

A lot of reading. A lot of waste of time.

Came through it, though.

You're a harder man than me.

- Do you wanna walk home?

Probably safer. What happened to the van?

If you push it down a big hill. Get in.

must hurt to sit down.

Dodd had been keeping her well away from us

out of fear she'd realise he was the least

interesting and ugliest out of his mates,

which he is, but he should have known