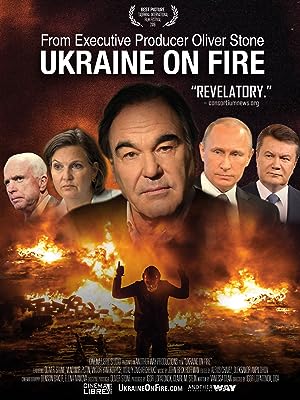 Synopsis: Ukraine. Across its eastern border is Russia and to its west-Europe. For centuries, it has been at the center of a tug-of-war between powers seeking to control its rich lands and access to the Black Sea. 2014's Maidan Massacre triggered a bloody uprising that ousted president Viktor Yanukovych and painted Russia as the perpetrator by Western media. But was it? "Ukraine on Fire" by Igor Lopatonok provides a historical perspective for the deep divisions in the region which lead to the 2004 Orange Revolution, 2014 uprisings, and the violent overthrow of democratically elected Yanukovych. Covered by Western media as a people's revolution, it was in fact a coup d'état scripted and staged by nationalist groups and the U.S. State Department. Investigative journalist Robert Parry reveals how U.S.-funded political NGOs and media companies have emerged since the 80s replacing the CIA in promoting America's geopolitical agenda abroad.
Genre: Documentary
Director(s): Igor Lopatonok
Actors: Fanny Sage, Arina Belanova, Evgeny Chernov, Vladyslav Chygryn
1 win.

the maidan the independence square

has turned into a full-scale war zone

there is absolutely no doubt that snipers

are working here. i counted 10 bodies

who shot those people. that is the problem

reporter:
now on the brink of civil war

and the death toll is rising

i repeat, no country is safe from them

reporter:
what we saw here today was a revolution

victoria nuland:
we have spent over 5 billion dollars to assist ukraine

whatever they're talking about

they are talking about money

up to the borders of russia. 13 countries

narrator:
the focus has to be not allowing

this crisis to turn into a hot war

between ukraine and russia

viktor yanukovich: this is a dangerous topic

no one should feel safe today

it's an ancient and proud land

with a rich history

filled with much beauty

ukraine is a border land

a place where east meets west

this is the flag of ukraine

the blue represents the sky

the gold is seeming endless fields of wheat

ukraine is a prize many have sought

and much blood was spilled in a quest to posess it

ukraine has been the path for the western countries

as they attempted to conquer the east

in world war I

and in world war II

and every time the ukrainian people payed

the highest price for this grand games of power

looking closely to the history of ukraine

one will notice many rhymes

being surrounded by stronger powers

ukrainians needed a lot of cunning to survive

the art they truly mastered in time

was the art of changing sides

iIn the middle of the 17th century

broke the peace they made with poland

and sided with more powerful russia

as the russian-swedish war was raging

broke the union with russia and switched sides

joining forces with the swedish invaders

was written by third parties

seeking to keep the gains of the revolution

russia agreed to the humiliating brest-litovsky peace of 1918

which turned ukraine into a german protectorate

that changed the fate of ukraine

was the molotov-ribbentrop pact of 1939

one of many such agreements being signed

between european countries and rising germany

attempting to protect his nation

from the approaching nazi threat

of non-aggression with adolf hitler

while promising each other peace

divided the map of eastern europe splitting it

into german and soviet spheres of influence

as soon as the molotov-ribbentrop pact was signed

and a part of the family of the soviet republics

but even this bold dividing of land

only delayed the war

germany broke its promise to the USSR

barbarossa was aiming for