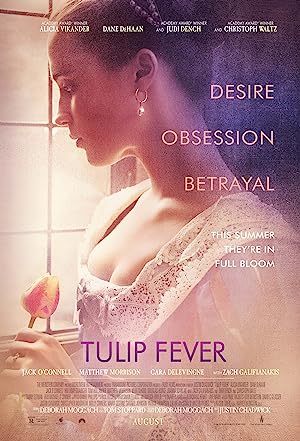 Synopsis: In 17th Century Amsterdam, an orphaned girl Sophia (Alicia Vikander) is forcibly married to a rich and powerful merchant Cornelis Sandvoort (Christoph Waltz) - an unhappy "arrangement" that saves her from poverty. After her husband commissions a portrait, she begins a passionate affair with the painter Jan Van Loos (Dane DeHaan), a struggling young artist. Seeking to escape the merchant's ever-reaching grasp, the lovers risk everything and enter the frenzied tulip bulb market, with the hope that the right bulb will make a fortune and buy their freedom.
Genre: Drama, History, Romance
Director(s): Justin Chadwick
Actors: Alicia Vikander, Dane DeHaan, Jack O'Connell, Holliday Grainger
Production: The Weinstein Company
1 nomination.

Before you were born, Amsterdam was captivated by a flower. The tulip. They came from far away, in the East, and were so rare and beautiful, for people lost their senses in wanting to own them. Rich and poor were spending and borrowing money to join the trade in bulbs, which were going up in price all the time. None more so than the rare striped tulips that were called breakers.

A new breaker came from nowhere, like an act of God, and it changed people's lives. A white flower with a God-given crimson stripe turned our lives upside down, mine and my mistress Sophia's.

- It's time to go! The abbess is calling!

But that was all to come when Sophia exchanged her life at St. Ursula's for marriage to Cornelis Sandvoort.

- ABBESS:
Marriage is a safe harbor. And you will have a fine house, a servant, and you will have children. Give him an heir, and everything will be fine. So, love, honor and obey. It's for the best.

MARIA:
In return for Sophia's sacrifice, her siblings received safe passage to New Amsterdam in the Americas to stay with their only living relative, an aunt.

And so Sophia arrived at the orphanage barefoot but left in a carriage.

- A man likes to leave something of himself behind. A son to inherit my name and fortune. My little soldier's dozy tonight. Time to report for duty, sir.

- Give me your hand.

- There. Stand to attention, sir.

- Cornelis. Meet my son and heir.

- So you and your wife didn't waste much time.

- I hear your wife's been wasting yours.

- Well, not for lack of trying.

- That orphan girl, send her back then. You've tried enough.

- I'll give her six months. It's best if I give her up after that.

- Which reminds me, that woman in Utrecht, she keeps asking about you.

- Ha. She wants to know when you'll be back.

- Just a touch of bright plumage in the detail.

- A woman who's been married three years needs to keep herself... interesting. Or life will become dulled. Do you know who she is?

- Of course. She's Danae being made love to by Zeus.

- That's Antonia Hocken, the tinsmith's wife. She could tell you a thing or two about him with the brush.

- And as for your dress, it'll be ready in a week.

- Quality is good. But, look, they've added shells to make the barrels heavier. Banda Islanders up to their tricks. Offer 85.

- I want every one of those barrels, when they're on the quayside, I want them opened and inspected!

MARIA:
These were happy times for me, and I would not have changed places with Sophia. She treated me like a sister, while my master rarely took notice of me.

- But you always like herring done in this way, sir, in sweet vinegar.

CORNELIS:
But fish three times this week? And several times last week, now I recall. Why? Are you in love with the fishmonger?

- Will I come tomorrow?

Deborah Moggach, OBE (born Deborah Hough; 28 June 1948) is an English novelist and screenwriter. She has written eighteen novels, including The Ex-Wives, Tulip Fever (made into the film of the same name), These Foolish Things (made into the film The Best Exotic Marigold Hotel) and Heartbreak Hotel. more…