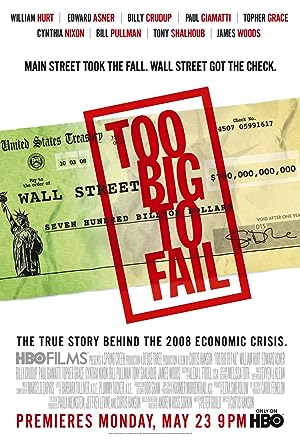 Too Big to Fail

Synopsis: A close look behind the scenes, between late March and mid-October, 2008: we follow Richard Fuld's benighted attempt to save Lehman Brothers; conversations among Hank Paulson (the Secretary of the Treasury), Ben Bernanke (chair of the Federal Reserve), and Tim Geithner (president of the New York Fed) as they seek a private solution for Lehman's; and, back-channel negotiations among Paulson, Warren Buffet, investment bankers, a British regulator, and members of Congress as almost all work to save the U.S. economy. By the end, with the no-strings bailout arranged, modest confidence restored on Wall Street, and a meltdown averted, Paulson wonders if banks will lend.
Genre: Biography, Drama, History
Director(s): Curtis Hanson
Actors: James Woods, John Heard, William Hurt, Erin Dilly
Production: HBO
Nominated for 3 Golden Globes. Another 5 wins & 28 nominations.

We have no intention of dismantling

However, we must come to grips

with inefficient and burdensome regulations.

We will eliminate those that are

Tearing down these antiquated walls and

In a victory for the banking industry,

which will allow commercial

to merge and form institutions

of unprecedented size and global reach.

I think it's very important for us not to

I do believe in the American dream.

Owning a home is a part of that dream.

We are taking action to bring many thousands

of Americans closer to owning a home.

This project not only is good

for the soul of the country,

it's good for the pocketbook

of the country as well.

The housing market has reached

It seems that everybody is building,

The Dow and the S&P both breaking records.

at Goldman Sachs this year.

Things that are too good to be true, are.

When you see something coming...

Will there be a soft landing,

or will the bubble burst?

A new story, the mortgage meltdown.

This morning in the mortgage meltdown,

that a record number of Americans

are losing their homes.

More than 70 mortgage companies have failed

in the last few months in America,

and now the biggest of the big companies,

the Bear Stearns, the big banks,

are caught holding the bag.

in the country, Bear Stearns,

It's being assisted by the government,

which is stepping in to guarantee

You've got to imagine that Hank Paulson

didn't think he signed up for this

when President Bush picked him

Hank Paulson may now have to undo

some of the deregulation measures

that he and his peers on Wall Street

pushed through when he ran Goldman.

I've got great confidence in our markets.

"They're resilient. They're flexible."

Ali, the truth is that Bear Stearns is only

a very small fraction of this story.

Our economy could face far worse

In the wake of Bear's collapse,

to reassure investors about the impact

of the mortgage crisis on its own assets.

Insurers of the firm under a great deal

of pressure this morning.

and the longest-running CEO

of a major investment bank on Wall Street,

has pulled the firm back

from the brink during other crises,

but today, for the first time that I'm hearing it,

investors are questioning his leadership.

investors have for Lehman Brothers,

of this investment bank's business?"

What are you talking about?

the big question this morning is,

"What options does Fuld have?"

So far, he has failed to raise new capital

while virtually all of his rivals

have already done so.

Too Big to Fail