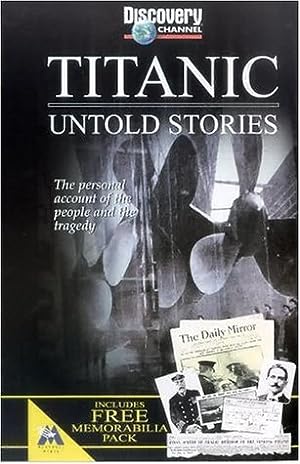 In the dark waters of the North Atlantic,

came to a violent and mysterious end.

Each of her passengers unwitting players

in a harrowing drama.

The builder who would pronounce her dead.

The brave men who refused to let her die.

Thousands of people who struggled

Now for the first time, a prominent

from the ship's actual decks.

Haunting locations will take us back to

pivotal moments during the epic disaster.

Newly discovered artifacts are helping to

It's a moment in history we'll still

striving to understand, a part of our past

On the French research vessel Nadir,

The crew prepares for an unprecedented

dive to one of the greatest shipwrecks

On Nadir's fantail, a prototype submersible,

Nautile, is run through a final series

She is one of a few submersibles able to

His mission, to document key sites on

the ship where critical events unfolded.

To Haas, Titanic is a dramatic stage.

But it is the characters

in the tragedy who draw him in.

I think in order to get a full picture

of what that night was like, you need to know

the people who were involved

By knowing the characters in the drama,

by knowing the people,

you get a much better insight into the

great drama of that night.

As part of Haas' mission, he will also

which may provide clues to Titantic's story.

When Nautile leaves these decks,

she will drop two and a half miles into

the Atlantic, into a hostile world.

A place of freezing temperatures,

If something goes wrong at the site,

there is no chance of a rescue.

In the control room, Nautile's position

will be monitored by expedition leader,

I'm really proud of this expedition

It's just a wonderful thing to be a part of.

The Titanic is the piece of our history

and it's just special in every direction.

Tulloch is joined by Titanic historian

There are many things that still can be

learned from Titanic, from the disaster,

from the recollection of the people

and of the events.

There are some major mysteries

that are still unsolved.

From the bridge, the crew watches as

A ship still giving up her secrets.

much of what they know is based on testimony

taken after the disaster.

Hearings were held in both the

United States and Britain which investigated

the reason for her sinking.

in rare diaries and letters.

from the ocean floor

In their research, historians have learned

most about passengers who traveled lavishly

in first and second class.

People such as Emily Ryerson

have given us a glimpse of what

Their stories have rarely been heard.

As the submersible Nautile descends

to Titanic, the crew prepares for arrival

Your approach to the Titanic is pretty much

You see the sand rolling under you and

Discuss this Titanic: Untold Stories script with the community: