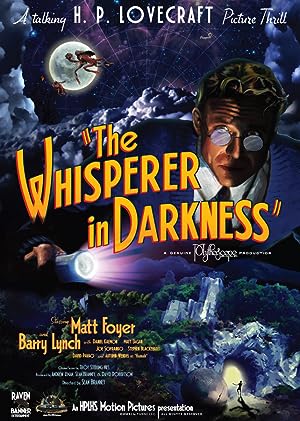 so far as I am concerned,

The rain poured down for days

and the flooding was extensive.

It washed all kinds of things into the rivers,

strange things floating in the water.

As the flood waters receded,

there was a widespread tendency

to connect these sights with a primitive,

Many of my friends appealed to me to

shed what light I could on the subject.

I thought all copies had been lost.

Didn't Armitage have the last known one?

I thought it was ruined in that business last year...

Yes, that was the last known printed copy.

This is Davenport's original manuscript.

And all his notes!

There's knowledge in those

It's quite a find.

What will you do with it? Another book?

Sure, eventually. But right now I

have a more immediate use for it.

I've been going over the notes in

preparation for this absurd "debate."

you shouldn't do it.

After all the back-and-forth

in the newspaper columns

about the "bodies" washed

up in the recent flooding...

You should have left it alone, Albert.

Nobody, nobody in this world knows more

about this particular area of folklore than I.

And you think that with Davenport's notes...

Exactly! Even a hundred years ago,

"A hidden race of monstrous

beings is said to lurk

somewhere among the remoter hills -

in the deep woods of the highest peaks.

Evidence of their existence was seen

by those who ventured far up the slopes

of certain mountains or in the deep,

that even the wolves shunned."

Here, look at this - illustrations

that have never been seen!

Tales of settlers who vanished and

others who collaborated with the things.

I'm familiar with... these legends.

And I'm sure you're right. But you can't debate it.

I have to be there in less than an hour.

It's being aired on the N.B.C. Network

You know who you're going up against?

And you think you can go on the radio and

the world's most prominent

How is this going to help your cause?

Look, I can convince people...

With the minutiae of

You only stand to lose here.

Nate, this is my life's work.

The whole reason to study folklore is to

help us understand how and why we create myths.

People can't keep believing that each

bolt of lightning is a spear thrown by Zeus!

It isn't Zeus I'm worried about.

of those nameless cults you investigate!

I know you've had some rough experiences...

I'm telling you, you have

nothing to gain from this debate.

C'mon, your pal Charlie Tower will be there.

He's footing the bill for the whole thing.

may be strange, but he's smart.

Be careful what you say.

Perhaps I should have taken Nate Ward's advice.

for his open contempt for science

and his extravagant books.

Charlie Tower, a friend and

paid to bring him to campus for the debate.

Tower had funded a number

Discuss this The Whisperer in Darkness script with the community: