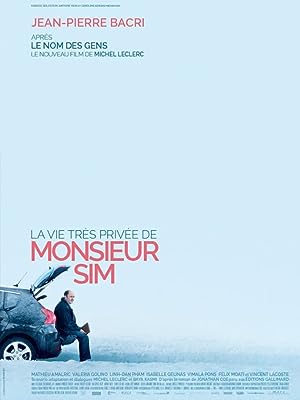 Synopsis: François Sim considers himself worthless and he may have good reasons for that. Hasn't he lost his job as well as his wife Caroline? Isn't he unable to relate to Lucy, his teenage daughter? Didn't he, when he was eighteen miss out on passion whereas the sexy, gorgeous Luigia opened her arms to him? Hasn't he - he who keeps craving communication - invariably proved a dreadful bore to others...? So, when Sim is unexpectedly offered a job, he takes it, hoping one more time to give a little bit of meaning to his life. Even if his task amounts to driving across France and trying to sell... a "revolutionary biological toothbrush" to reluctant dentists!
Genre: Comedy
Director(s): Michel Leclerc
Actors: Jean-Pierre Bacri, Isabelle Gélinas, Vimala Pons, Christian Bouillette
1 nomination.

Here you are. Your seat is here.

It's the first time I'm upgraded to Premium!

You were at the Lookea club too?

When you are a family, with toddlers...

They take care of everything, we are really at ease...

You feel really safe there.

- You have little children?

I have a 13 years old daughter.

Lucie. But this time, I was alone.

And, Lookea... It's not for lonely people.

That's why it feels so good to have a real conversation with someone!

Of course, you think "why is he going alone in Lookea"?

What happened is, my wife Caroline bought the trip on Internet...

and she left me one month later.

and I warned her, I said "take an cancellation insurance".

"you never know, just in case".

But I'm much better now.

And thanks to this stopover in Brindisi, I will visit my dad,

who is living down there, in the Apulia area.

I haven't seen him in 2 years.

Do you remember where you were when Jean Poperen died?

Because it's exactly the day I met Caroline.

You, I don't know, but I really liked Jean Poperen.

- He was number 3 in the organisation of the Socialist Party !

With the colleagues, we were going to Leon de Bruxelles at noon...

Because we liked it, and by the way, Leon, it's not only the mussels!

People are like "Mussels, mussels", but no, there are other things.

their menu is extensive, they have salads, fries of course,

Whatever. Colleagues go at one table, I'm going to another one,

and they ask Caroline to join them.

But no! She comes to MY table.

One of the best moments of my life.

She was very pretty.

She had a voice... like a sour patch candy. Very pretty.

I work in HR, on the other side.

She was HR director in an insurance company.

- But I want to become a writer.

But she did not.

These things happen slowly. One day, you realize...

Ah, can we have 2 glass of champaign?

Since it's free on Premium...

- What's happening to him?

Do you think it's linked with what I was saying?

It comes from somewhere...

Your trip was good?

Well, I will prepare your room. I'll be back.

Where does she live now, Caroline?

- So, you often drive between Bourg-en-Bresse and Clermont.

And you take the A75, until Tournus?

I was sure. It's not the best way.

You have to leave Bourg-en-Bresse by the north.

Here you go. You take the D979 until Viriat.

This way, you drive around Macon.

- Then you go to Tarrar, and you are on the highway...

- Are we going to have lunch?

But you can go.

It's not too busy at this time, it's gonna be OK.

Say, can you pass by the apartment in Roanne, pick up a folder for me?

Sure. Why do you keep this place, empty and useless?

It's a brown folder. It's called "My Flower of Evil".

You may actually read it.

Then you'll understand why you were born.