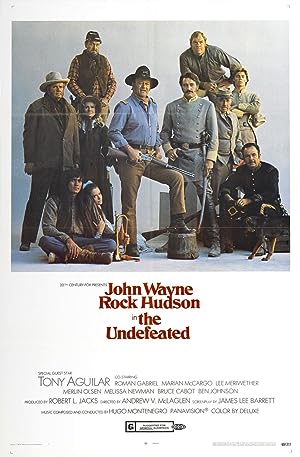 Synopsis: After the Civil War, ex-Union Colonel John Henry Thomas and ex-Confederate Colonel James Langdon are leading two disparate groups of people through strife-torn Mexico. John Henry and company are bringing horses to the unpopular Mexican government for $35 a head while Langdon is leading a contingent of displaced southerners, who are looking for a new life in Mexico after losing their property to carpetbaggers. The two men are eventually forced to mend their differences in order to fight off both bandits and revolutionaries, as they try to lead their friends and kin to safety.
Genre: Western
Director(s): Andrew V. McLaglen
Actors: John Wayne, Rock Hudson, Antonio Aguilar, Roman Gabriel
Production: Twentieth Century Fox Home Entertainment

[ Man Approaching On Horse ]|It's over!

Who gave you permission to come|ridin' across the face of my|command yellin' like a fool?

- Have you got a message for me|from General Masters?|- Yes, sir.

Our wires were down!|With your permission, sir!

Rig up a flag of truce,|Blue Boy!

I be a sergeant, sir!|Can I be of any service to y'all?

Who be givin' orders today,Jim?

We received the news yesterday!

I don't think you understand,|Major! The war is over!

Are you telling me that|you intend to keep fighting?

Because this is our land,|and you're on it!

Thank you for your courtesy!

That means that officially we|no longer exist as an armed body,

yet everywhere I look here|today I see armed men!!!

All right, people,|now listen to me, all of you!

Seven hundred of them are between|here and the Mexican border!!!

and through a Yankee|occupation army!

We are not gonna give the lowliest|blue belly we meet along the way!!!

any reason to suspect we're anything|but a band ofhomeless pilgrims.

Until we cross the Rio Grande,|arms and ammunition will remain|in the bottom of the wagons!

The poorer looking, the better.

Now, once across the border,|we still have another 500 miles to go!!!

before we reach|a town called Durango!

There we will be met by representatives|of Emperor Maximilian!!!

who will escort us to Mexico City!

Down with the traitor|Up with the star

We will rally from the hillside

We'll gather from the plain

Down with the traitor|Up with the star

While we rally|'round the flag, boys

In Dixie Land where I was born

Early on one frosty mornin'|Look away, look away

I wish I was in Dixie|Hooray, hooray

In Dixie Land|I'll take my stand

To live and die in Dixie

Away, away|Away down south in Dixie

Away, away|Away down south in Dixie

This here's my partner,|Jimmy Collins!

Discuss this The Undefeated script with the community: