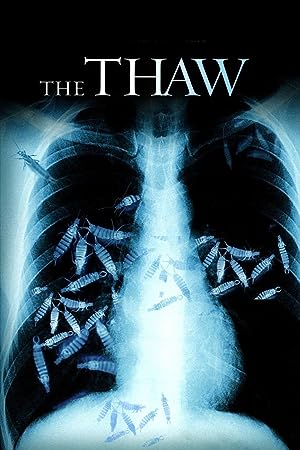 Synopsis: At a remote Arctic research station, four ecology students discover the real horror of global warming is not the melting ice, but what's frozen within it. A prehistoric parasite is released from the carcass of a Woolly Mammoth upon the unsuspecting students who are forced to quarantine and make necessary sacrifices, or risk infecting rest of the world
Genre: Horror, Sci-Fi, Thriller
Director(s): Mark A. Lewis
Actors: Val Kilmer, Alexandra Staseson, Brad Dryborough, Greg Rogers
Production: Lionsgate
1 win & 13 nominations.

My name is David Kruipen.

What does it mean|to make a real difference?

Throughout my life and career,|I have straddled two worlds.

Increasingly I have become...

...are published and read.

Increasingly I have been|embraced by policymakers...

...and referenced by bureaucrats...

You said it was a tick.

I know, sweetheart,|but I need you to stay still.

Okay, it's just about there.|Hold on, hold on.

Okay, there, Doug,|do you see that?

I want you to grab it. Honey,|keep your head still, please.

We have to do something|about the population.

- And what is wrong with the population?|- We have too many people.

There's way too many people|using way too much stuff.

That's why we have|global warming.

They will tell you|that we are on the verge...

...of imminent destruction.|The carbon dioxide in the air...

...is gonna turn our atmosphere|into a microwave...

What a load of crap.

I don't care what they say.

I believe it's prophecy|being fulfilled...

Of course there's global warming|and of course it's man-made.

I don't think that people are|going to do enough in time.

We're on the brink of Armageddon.|Most of us will die.

The few of us who survive will be...

And what can we do about it?

We make small sacrifices,|but the real ones that really matter...

What does it mean to make|a real difference?

...well, we have to consider|other options.

There is complete chaos|in the streets.

State troopers and the National Guard|were ordered to seal off all borders...

...as people|are trying to flee.

When nature is the terrorist...

It's too late to do anything.

One of the horrors...

The worst bioterrorism|we've ever known.

He must have traveled far.

The teeth... only two years old.

He probably tried to swim...

What did you find, man?

The pine beetle is|just one example...

...of the profound impact|global warming is having on the planet.

The truth is our way of life|is leaving the door open...

...to an infinite number|of threats...

Mark Alun Lewis (born 7 December 1962) is a professor and Canada Research Chair of mathematical biology in the University of Alberta Department of Mathematical and Statistical Sciences and Department of Biological Sciences. Among other topics, he has written extensively on the Allee effect, invasive species, parasitism, and biological dispersal.In 2015, he was elected as a fellow of the Royal Society of Canada. He was elected as a fellow of the Society for Industrial and Applied Mathematics in 2017, "for contributions to mathematical biology and the study of spatial dynamics processes". more…

Discuss this The Thaw script with the community: