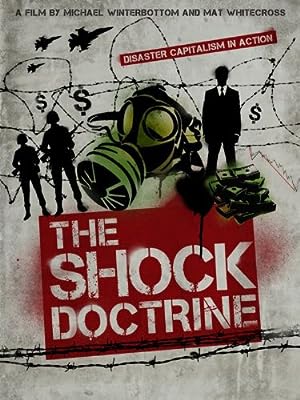 Synopsis: Naomi Klein gives a lecture tracing the confluence of ideas about modifying behavior using shock therapy and other sensory deprivation and modifying national economics using the "shock treatment" of Milton Friedman and the Chicago School. She moves chronologically: Pinochet's Chile, Argentina and its junta, Yeltsin's Russia, Bush and Bremer's Iraq. A trumped-up villain provides distraction or rationalization: Marxism, the Falklands, nuclear weapons, terrorists; and, always, there is a great shift of money and power from the many to the few. News footage, a narrator, and talking heads back up Klein's analysis. She concludes on a note of hope.
Genre: Documentary
Director(s): Mat Whitecross, Michael Winterbottom
Actors: Ewen Cameron, Janine Huard, Naomi Klein, Franklin D. Roosevelt
Production: Sundance Selects

It's not just what happens to us when something bad happens.

It's what happens to us when we lose our narrative...

When whe lose our history, when we become disoriented.

What keeps us oriented, and alert, and out of shock...

So, period of crisis, like the one we are in

is a very good time to think about history

It's a good time to place ourselves

in the longer human story of struggle.

Based on Naomi Klein's Book

y Astroboy7 translated by NoOne

when representatives of western intelligence agencies

into the effects of sensory deprivation at McGill university.

Sensory deprivation really is a way of producing extreme monotony.

and the subjects complain that they can't even daydream.

And when you have colege students that can't daydream. You are ahead the bad way.

I began to think while we were doing our experiments, that it's possible that

something that involves physical disconfort, or even pain

might be more tolerable than simply the deprivation conditions that we studied.

Hebb decided to stop work on the research.

I had no idea when I suggested that

But the experiments at McGill continued

on the hands of the ambitious head of psichyatry Dr. Ewan Cameron.

What he did was much more than what we had done.

at any point he whish to, and some did.

Cameron's patients were not so lucky.

The Allan Memorial Institute where he worked

began to resemble a macabre prison

where Cameron performed bizarre experiments on his psichyatric patients.

Cameron wanted to depatern? or wipe clean his patients minds

so he could rebuild them from a blank slate.

I used to shiver when they told me about

"You are gona get a shock treatment tomorrow".

I used to shiver. I was so scared of it.

I would wake up in another room

all mixed up and sad

it used to make me very sad after.

and the repeated playing of taped messages.

you're running away from your responsability."

"You don't want to take care of your husband and children."

All the time the same thing.

Yes, interrogation, but, for what purpose?

It wasn't long before CIA put Cameron's research into practice.

Many of these techniques appear in the agencies KUBARK

These words are from the manual:

It's a fundamental hypothesis of this handbook

that this thecniques are, in essence, methods of producing a regression of the personality.

There is an interval, which may be extremely brief

a kind of psychological shock or paralysis.

Experiencied interrogators recognises the fact when it appears.i/

far likelier to comply than he was just before he experienced the shock.

At the same time as Dr. Ewen Cameron was conducting his experiments in Montreal

an exponent of another kind of shock was working not so far away.

Naomi Klein (born May 8, 1970) is a Canadian author, social activist, and filmmaker known for her political analyses and criticism of corporate globalization and of capitalism. She first became known internationally for her book No Logo (1999); The Take (2004), a documentary film about Argentina’s occupied factories, written by Klein and directed by her husband Avi Lewis; and significantly for The Shock Doctrine (2007), a critical analysis of the history of neoliberal economics that was adapted into a six-minute companion film by Alfonso and Jonás Cuarón, as well as a feature-length documentary by Michael Winterbottom.This Changes Everything: Capitalism vs. the Climate (2014) was a New York Times Bestseller List non-fiction bestseller and the winner of the Hilary Weston Writers' Trust Prize for Nonfiction in its year. In 2016 Klein was awarded the Sydney Peace Prize for her activism on climate justice. Klein frequently appears on global and national lists of top influential thinkers, including the 2014 Thought Leaders ranking compiled by the Gottlieb Duttweiler Institute, Prospect magazine's world thinkers 2014 poll, and Maclean's 2014 Power List. She is a member of the board of directors of the climate activist group 350.org. more…