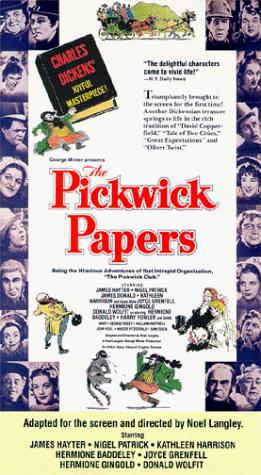 Synopsis: The Pickwick Club sends Mr. Pickwick and a group of friends to travel across England and to report back on the interesting things they find. In the course of their travels, they repeatedly encounter the friendly but disreputable Mr. Jingle, who becomes a continual source of trouble for all who know him. Pickwick himself is the victim of a number of misunderstandings that bring him both embarrassment and problems with the law.
Genre: Comedy, Drama
Director(s): Noel Langley
Actors: James Hayter, James Donald, Nigel Patrick, Joyce Grenfell
Production: Renown Pictures
Nominated for 1 Oscar. Another 1 nomination.

publisher, paid the vast sum of 14 pounds a month to

to write a series of comic adventures around an

imaginary club and the misadventures of its

His name was Charles Dickens, and he obliged by

this little gentleman you now see before you, Mr.

Pickwick himself. So now pray silence for his noble

Speculations on the Source of the Hampstead Ponds

Observations on the Theory of Tittlebats, I wish to

the motion that he should now enlarge his sphere of

observation by journeying forth into the Length and

Tupman, the club authority on matters of romantic

Mr. Nathaniel Winkle, the all-round sportsman of the

I second this motion.

As a guest of this distinguished club, I hereby

extend my hospitality to Mr. Pickwick when so ever his

explorations take him to Kent, where I'LL insist on

him putting up at Dingley Dell Farm as my honored

Thank you. And as another honored guest, I hereby

extend my invitation to Mr. Pickwick when his Literary

pilgrimage brings him to Etonsville, at which time I

shall arrange one of my celebrated Literary

breakfasts in his honor.

Well, off they go, Mrs. Bardell. Good-bye, my fine

Thank you, thank you.

Ah, cabman, to the Golden Cross.

How old is that horse, cabman?

42? Extraordinary. I really must make a note of

that for our next meeting of the club. But does he

Only when we take him out of the cab. Then he

falls down. But when he's in it, we bear him up very

and take him in when it's cold, and we got a pair of

prize wheels on, so that when he moves, they run

Mr. Pickwick. ALL ready for fay eh? Here's your fare.

That for your shilling and I request the pleasure of

fighting you for it. Come on, stick up your hands.

Come on, all four of you.

Would you believe as a company informer that a

would use a man's cab and not only take his number

but every word he says in the bargain?

Yes, he did. Then agitates me into assault and

then gets three witnesses here to prove it. I'LL get

even with him, even if I do six months. Come on.

My dear sir, my name is Pickwick. Samuel Pickwick.

I'm chairman of the Pickwick club of which these

happen to be honored members and my friends. I

making a few notes on the extreme age and singular

habits of this cabman's horse, it being our custom in

the club to collect and comment about anything we

find particularity interesting, when he without

What? Respected gentleman. Know him Well. 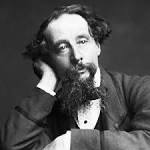