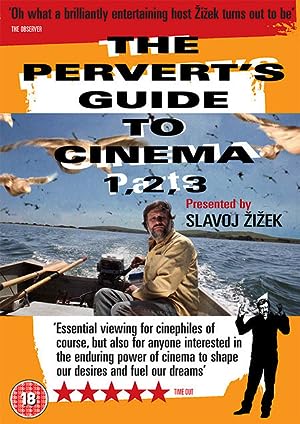 Synopsis: THE PERVERT'S GUIDE TO CINEMA takes the viewer on an exhilarating ride through some of the greatest movies ever made. Serving as presenter and guide is the charismatic Slavoj Zizek, acclaimed philosopher and psychoanalyst. With his engaging and passionate approach to thinking, Zizek delves into the hidden language of cinema, uncovering what movies can tell us about ourselves. Whether he is untangling the famously baffling films of David Lynch, or overturning everything you thought you knew about Hitchcock, Zizek illuminates the screen with his passion, intellect, and unfailing sense of humour. THE PERVERT'S GUIDE TO CINEMA cuts its cloth from the very world of the movies it discusses; by shooting at original locations and from replica sets it creates the uncanny illusion that Zizek is speaking from 'within' the films themselves. Together the three parts construct a compelling dialectic of ideas. Described by The Times in London as 'the woman helming this Freudian inquest,' director Sop
Genre: Documentary
Director(s): Sophie Fiennes
Actors: Slavoj Zizek
Production: ICA Films
1 nomination.

The problem for us is not,

"Are our desires satisfied or not?"

"How do we know what we desire?"

There is nothing spontaneous,

nothing natural, about human desires.

Our desires are artificial.

We have to be taught to desire.

Cinema is the ultimate pervert art.

It doesn't give you what you desire,

it tells you how to desire.

The Pervert's Guide to Cinema

Oh, I do like you, but it just isn't good enough.

Your mother asked me up for supper.

Okay. Bring some ice cream with you, will you?

Sure. What kind do you want,

in this wonderful clip from Possessed

is commentary on the magic art of cinema

We have an ordinary working-class girl,

All of a sudden she finds herself

in a situation where reality itself

She approaches the rail,

the train is passing, and it is as if

what in reality is just a person

standing near a slowly passing train

turns into a viewer

observing the magic of the screen.

Oh, don't go away. Looking in?

Wrong way. Get in and look out.

We get a very real, ordinary scene

onto which the heroine's inner space, as it were,

her fantasy space is projected,

so that, although all reality is simply there,

the train, the girl,

part of reality in her perception

and in our viewer's perception

is, as it were, elevated to the magic level,

becomes the screen of her dreams.

This is cinematic art at its purest.

This is your last chance.

After this there is no turning back.

You take the blue pill, the story ends.

You wake up in your bed

and believe whatever you want to believe.

You take the red pill, you stay in Wonderland

and I show you how deep the rabbit-hole goes.

But the choice between the blue and the red pill

is not really a choice between illusion and reality.

Of course, the Matrix is a machine for fictions,

but these are fictions

which already structure our reality.

If you take away from our reality

the symbolic fictions that regulate it,

you lose reality itself.

Definitely not some kind of

transcendental pill which enables a fake,

but a pill that would enable me

to perceive not the reality behind the illusion

but the reality in illusion itself.

If something gets too traumatic, too violent,

even too filled with enjoyment,

it shatters the coordinates of our reality.

We have to fictionalise it.

The first key to horror films is to say,

but without the horror element."

This gives us, I think, the background.

We're in the middle of Bodega Bay,

where the action of Hitchcock's Birds takes place.

Birds is a film about a young, rich, socialite girl

from San Francisco who falls in love with a guy,

goes after him to Bodega Bay,

that he lives with his mother.

Of course, it's none of my business,

I think I can handle Melanie Daniels by myself.

Well, as long as you know what you want, Mitch.

I know exactly what I want.

And then, there is the standard oedipal imbroglio

of incestuous tension between mother and son,

the son split between

his possessive mother and the intrusive girl.

- What's the matter with them?

- What's the matter with all the birds?

- Where do you want this coffee?

- Here on the table, honey.

Hurry up with yours, Mitch.