escort the boat. Flying above it is a HELICOPTER.

A SERBIAN MAN captains the wheel. SERB 2 scans the

horizon with binoculars. He checks the GPS system, then

his watch, then speaks into his throat mic. All italics

The JET SKIER in the lead weighs in on a radio.

The HELICOPTER PILOT weighs in.

All clear from above.

The camera descends as the boat passes, and dives beneath

from the boat and skis bubbles.

Calm. Then from out of nowhere five NAVY SEALs wearing REBREATHERS

JET PROPELLED BACKPACKS push the SEALs through the water.

follow his finger to the underbelly of the boat above.

From his belt, Shane takes a steel wand with an adhesive

disc attached, aims it at the fleeing boat and FIRES.

A cable shoots up -- THUD... The disc sticks to the

boat’s hull. Shane pushes a button on the wand retracting

the cable and drawing himself closer.

Dangling from the cruiser, Shane fixes a BOMB to the

hull. He releases himself from the boat and speeds away -

BOOM. A dense explosion sends ripples through the water

and ELECTRICITY crackling around the boat.

A SURGE of ELECTRICAL FORCE blasts from the control

The two Serbian Men jolt backwards -- WHAM -- and hit the

wall. All the needles inside all the dials go LIMP. The

roar of the engines DIES and the boat STOPS.

Shane slips inside the hull, through the new hole.

The chopper slows to a hover. The Pilot looks below.

The jet skiers protectively circle the injured boat in a

SYNCHRONIZED SWIMMING move, and the Jet Ski drivers are

simultaneously YANKED below the surface: a split second

later they’re replaced by our SEALS (ALSO IN BLACK WET

SUITS AND GOGGLES) -- the switch happens in less than a

second, way too fast for anyone to notice.

The shaken Serbs climb to their feet.

They look around, and see the SEALS, on the jet skis: In

the masks they are indistinguishable from the GUN-TOTTING

MEN they switched paces with. All seems clear. Serb 1

pushes on the throttle... nothing.

Suddenly the boat lists -- and water pours in, under the

cabin door. They spring into action!

GUARDS and the Jet Ski drivers (now our Seals).

Something must be below us! Shoot! Shoot!

The Armed Guards fire relentlessly into the water. Serb 2

PROFESSOR CHARLES PLUMMER, bound to a chair and gagged,

tries to YELP as the room begins to flood with water.

Serb 2 runs down steps to the lowermost hold. He tries to

force the door open. When it finally opens, he is forced

back by a three foot wall of water. 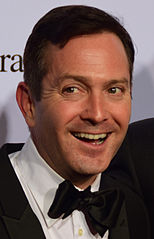 Thomas Patrick Lennon (born August 9, 1970) is an American actor, comedian, screenwriter, producer and director best known as a cast member on MTV's The State and for his role as Lieutenant Jim Dangle on the Comedy Central series Reno 911!. He is the writing partner of Robert Ben Garant. more…