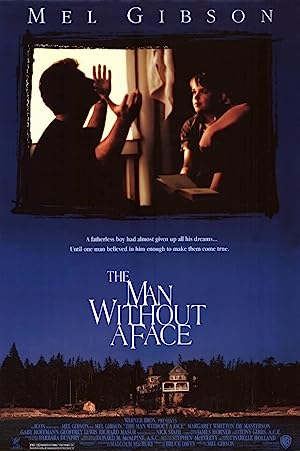 The Man Without a Face

Synopsis: The story of a relationship between a teacher and his troubled pupil. Justin McLeod is a former teacher who lives as a recluse on the edge of town. His face is disfigured from an automobile accident and fire ten years before in which a boy was incinerated and for which he was convicted of involuntary manslaughter. He is also suspected of being a pedophile. He is befriended by Chuck, igniting the town's suspicion and hostility. McLeod instills in his protégé a love of justice and freedom from prejudice which sustains Chuck beyond the end of the film.
Genre: Drama
Director(s): Mel Gibson
Actors: Mel Gibson, Nick Stahl, Margaret Whitton, Fay Masterson
Production: Warner Home Video
3 nominations.

'My mother was proud of her son's wings.'

'My half-sister, Meg, lost her braces.'

'My other half-sister, Gloria, had realised my intellectual superiority'

..And was quietly respectful to me.'

'My step-fathers were slaves, captured in battle.'

'Not too bright, not too loud. Hugely attractive.'

..if you consider Hef a philosopher, or John Wayne.'

'But whatever the dream, there's always a face that I can't see...

..that I keep missing, out there beyond the edge of the crowd.'

"This is WJB Boston."

Turn it up, I love this song!

It's too loud already.

Turn it down, Meg.

Mother, will you reason with her?

Mother, I was listening to that!

Don't whine. It's so unattractive.

It was wearing down the battery.

No, it wasn't. Batteries can run for hours like that.

What an engineer(!) I thought airplanes were your forte.

Was I talking to you?

This is our pilot, Charles Norstadt.

Yeah, was he talking to you? Come on, Gloria, spare us.

Did you see that? They ate right out of my hand!

You're doing that thing again.

You get that look on your face.

Where do you go when you do that? He came this close to my eyes.

It's a beautiful day, isn't it?

I wanna be sure the next guy's nice. More like my dad than Gloria's.

I didn't say that.

Doesn't matter. I won't be here much longer.

I can take the exam again.

I didn't say anything. Anyway, she'll never let you go.

What is it, Charles?

I wanna retake the exam.

You've had your chance, Charles.

I can retake it at the end of August.

I don't want you at boarding school.

It's my dad's school.

I don't want you at a military academy.

They're fascist and unnatural.

Well, there's no risk letting him take the exam.

Can you see him cramming Latin and geometry at the cottage?

If you wanna give up your whole vacation, you can try again.

No, not the whole summer.

You know it takes you longer than other children.

It's nothing to be ashamed of.

You know you're Goober Pyle!

Down, boy! Lie down!

This tyre's been vandalised.

Half a dozen deliberate punctures.

Oh, my God! Who would do something like that? That's crazy!

Isn't that Hamburger-Head? You know, McLeod?

I thought he never left his dungeon.

Don't stare. We're not at a circus.

'"Will I actually commit the crime? That is for the coin to decide."'

"Which face will it show? The whole, or the ruined?"

"The coin has decided. And so, Two-Face must strike...

"as the bells of Gotham City ring out into the murky night."

Oh, no! Here she comes. Better get you out of here, Mac.

Charles, what are you doing?

You're not gonna get lunch in bed. Come on!