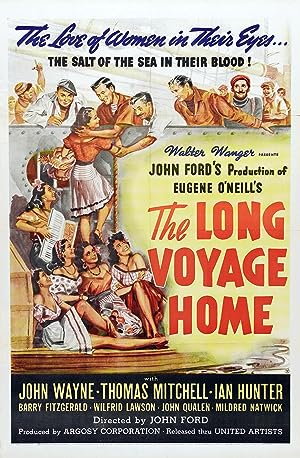 Synopsis: Aboard the freighter Glencairn, the lives of the crew are lived out in fear, loneliness, suspicion and cameraderie. The men smuggle drink and women aboard, fight with each other, spy on each other, comfort each other as death approaches, and rescue each other from danger.
Genre: Drama, War
Director(s): John Ford
Actors: John Wayne, Thomas Mitchell, Ian Hunter, Barry Fitzgerald
Production: Criterion Collection
Nominated for 6 Oscars. Another 3 wins & 1 nomination.

were taken, as well as inestimable booty.

By scoring several hits, our artillery...

about to sail to return to harbor.

under the fire of German anti-tank guns.

bombing in Chungking had been received.

Anyone left the ship, Donkeyman?

Smith, signed on at Cape Town.

So why didn't you report it | when the lights went out?

All right, Mister. | Check everyone in the fo'c's'le.

What are you doing here, steward?

Just turned in for a wink of sleep, sir.

Do you always sleep with your clothes on?

That fellow belong to me.

He was here just a little while ago, sir.

I go find him, tell him you want him, huh?

Stay where you are.

I know that you men have been | grumbling about shore leave.

When I found the native police | had picked up a seaman ashore,

I guessed it was Driscoll.

Oh, it's a grand evening | to be taking a few winks on deck.

With that sun coming over the water, sir, | I was dreaming...

Never mind about that. | Let's have a look at your hands.

The back of it, man.

There's a native policeman ashore | with a broken jaw.

Well, I'm glad for once | it's someone from another ship.

Dawson put up a bit of a fight. Ole.

with their white caps | and their brass buttons

step out and ask for my pass.

I never was a neutral in all my life.

The ladies will be aboard any minute now | with huge, big baskets of fruit.

Hey, what about the booze?

Under the fruit, there'll be a bottle | or two like this for each one of you.

Would you have the Mate after us?

Well, I hope you enjoyed it.

There's a bumboat | coming along the side, sir...

I suppose you're wondering | why I'm relaxing discipline.

I thought the First had told you the orders.

They said the ship was being ordered | to the United States, sir, to pick up cargo.

Come on. Get them up.

Hey, get back there.

Come on. Get them up there.

You're in charge of this party. | And no rough stuff.

Is it trouble you're after?

You want the Mate down on our necks | to spoil all the fun?

Discuss this The Long Voyage Home script with the community: