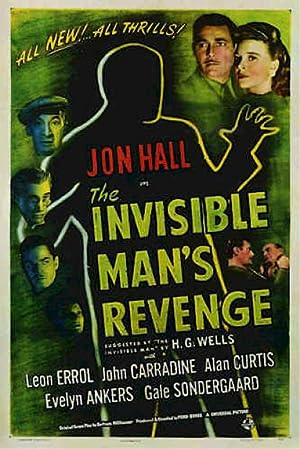 Synopsis: An eager scientist tests his new formula for invisibility on an escaped fugitive. When the formula works the criminal runs off to terrorize a family he believes cheated him out of a fortune years earlier.
Genre: Horror, Sci-Fi
Director(s): Ford Beebe
Actors: Jon Hall, Leon Errol, John Carradine, Alan Curtis
Production: Universal

the Burberry and the hat.

There you are. Thank you, sir.

Did you come off the Ella Campbell, sir?

Who said I came off the Ella

Campbell? Who's been spying on me?

I don't wanna be spied on.

Understand? I've had enough of that.

Yes, sir. No offense, I assure you.

Here's your change, and thank you, sir.

on you. Quite all right, sir.

You see, I've been away. Have you now?

And you won't be wanting these, sir?

Thank you, sir. And good luck to you.

Will you join us in a cocktail?

It's his fault. It's not

my fault. It's my editor's.

You're a journalist, aren't

you do write features.

stopping at the inn, I believe?

Yes, it's quite attractive. He

says the maids are very pretty too.

I say, Julie, I wouldn't take that bright

line with ady Anstey if I were you.

Mark, do you think your grandmother

will find me an evil influence?

You don't know my grandmother. Shall we go?

All right. Are you sure

you can't stay to dinner?

They weren't so grim, were they? No.

Did I look as silly as I felt? I wondered

if you felt as silly as you looked.

Family, yes. But no money, of course.

Well, after all, our

Yes, sir. He said it's of long-standing.

Who is it, Cleghorn?

He said his name is Robert Griffin.

Show him in at once! Yes, sir.

Why, Jasper, it isn't possible.

Now don't tell me you don't recognize me.

Rob! Rob, you old rascal, you.

I knew you'd be glad to

see me. My old friends.

But how on earth did

you... Where have you been?

Come on. Give me your coat.

Sit down. Tell us what happened.

Maybe you'd better tell me. I was

a little confused that last day.

Well, no wonder. You were

burning up with fever.

through that foul jungle.

You and Jasper were right behind me.

I remember that part of

Dear Irene. You did your best, I know.

But something hit me on the head!

We thought you were done for. Yes.

And you went on without me. Look here, Rob.

The supplies were running out, and

the bearers were getting out of hand.

Do you think I should have stayed

with you and sent Irene on alone?

Why, no, Jasper, not for the world.

It wasn't easy going on without

you, Rob, but we left Salim with you.

The only one we could trust. When he caught

up with us, he swore that you had died.

What happened, Rob, after you came to?

I don't remember a single thing

after I got that blow on the head.

Not until the next blow.

That was two months ago. No!

Why, it's more than five years. I know.

And they're gone, clean gone!

What I did or where I went, it's all a blank.

Until two months ago. And then?