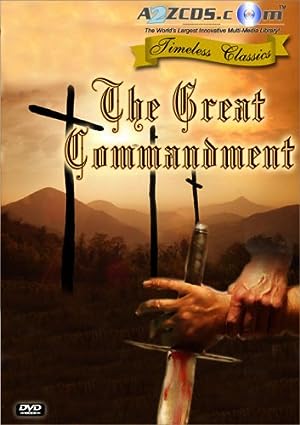 Synopsis: The Great Commandment is a Christian film directed by Irving Pichel, which portrays the conversion to Christianity of a young Zealot, Joel, and the Roman soldier Longinus through the teachings of Jesus in his Parable of the Good Samaritan. It was co-produced by Rev. James K. Friedrich and released by Cathedral Films in 1939. Its theatrical release was in 1941 by Twentieth Century Fox.
Genre: Drama
Director(s): Irving Pichel
Actors: John Beal, Maurice Moscovitch, Albert Dekker, Marjorie Cooley
Production: Universal Pictures

Blessed be the Lord God of the universe

with giving this bird wisdom

distinguished Dave that's gratitude do a

This your idea of a joke have you

forgotten what happens Sabbath before

last between here and Jericho 200

crosses against the sky and a few Roman

men but we won't break the power of Rome

by wearing knives and our sleeves orders

from Jerusalem and to keep our weapons

concealed from now on till we need it

yeah it'll be safer there with mine yeah

you'll be safer too big brother

I'll forget that I'm not talking to you

as your brother now wasn't I chosen

ahead of the zealots in this village yes.

Joel but you had I mean to be obeyed

the lion doesn't bare his fangs until

please what do you want water to wash it

you know it forbidden for us to speak

yes but a beggar could speak anyway

and your mouth is comely

you're altogether beautiful my life you

shouldn't see much from the Song of

I know but know this much more I'll say

it all for you.

That is the first thing this morning I'd

second the fields you the scholar of the

I found him by the road at dawn he had

bound up his wound and was able to give

me the name of his village which lies

about one lead to the north more than

that he hadn't a straight to say

that's good it's good to be among

friends after the Romans Romans they

arrested me but I couldn't pay the tax a

chain on my wrist that I stumbled and

fell the soldier drew his sword now I

have no hand dogs the filthy heydon't be

warned they are coming why what is this

tax you speak up you haven't heard all.

Judea is being taxed in punishment of

the recent revolt we must drive his

Roman beasts out of our land but what

can we do without a leader to turn to

we're helpless a nation without a king

is a nation lost

nation lost he's right it looks as if we

will need our weapons Corvo zealous

together and we're wise either wait what

for you organize as elves in this

village you preach resistance to Rome

yet now you say we're not ready to

resist Judea was a nation once someday

she will be again I say wait and work

for that day go onto the fields I'll

tell father of this

Now my son will take up your study

han't applies thy heart to understanding

I have news important to the village the.

Romans have laid a new tax on our people

when did you hear it just now

well merchants who stopped within our

gates he had with him an escaped

they're taking prisoners as well as

distant from us but father when they

come here as they will we can't stop

them not now but we ought to begin to

prepare ourselves and we are prepared is

not the Lord with us always our only

duty is to follow his holy law as you're

a scholar scribe as you will be but we

need a king in Israel is it not written

that someday there will come a messiah

to deliver us someday we need the

Messiah now when the time is right he

will come wearing the crown of David and

with the sword of David in his hand yes

since he created his people the Lord has

not deserted us he has seen us through a

poverty the hatred of parents do you

think he will abandon us now I have no

Discuss this The Great Commandment script with the community: