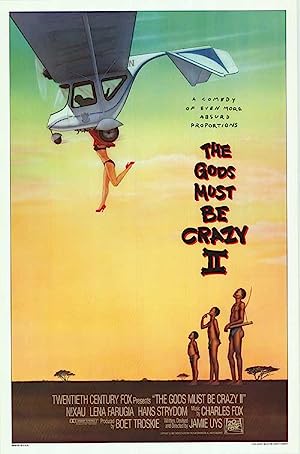 The Gods Must Be Crazy II

Synopsis: Xixo is back again. This time, his children accidentally stow away on a fast-moving poachers' truck, unable to get off, and Xixo sets out to rescue them. Along the way, he encounters a couple of soldiers trying to capture each other and a pilot and passenger of a small plane, who are each having a few problems of their own.
Genre: Comedy
Director(s): Jamie Uys
Actors: N!xau, Lena Farugia, Hans Strydom, Eiros
Production: Sony Pictures Home Entertainment
1 nomination.

Anyone else would die of thirst

in a few days. In this arid desert...

But the slender, graceful

Bushmen of the Kalahari...

... live here contentedly and in complete

harmony with their environment.

They have lived undisturbed for

... the only people in the world who know

how to live without surface water.

When ivory poachers in high-tech

vehicles intrude into this thirst-land...

... to hunt elephant, they have to drag

reservoirs of water with them.

And when the water runs low they have to

hightail it out of the Kalahari again.

So the Bushmen work and play

world outside their domain...

...and even of the wars that are fought

on the very fringes of the Kalahari.

Sometimes Xixo tells about the time

he looked for the end of the Earth...

...and about the strange,

...but it's difficult to describe

those who live outside the Kalahari.

He always ends by saying the heavy

... that can make things move

and even fly, but they're not bright...

...because they can't survive without

to read the news.

They can read that

the hyena has a new girlfriend...

and the oryx is migrating to the west.

Older children teach younger ones how

to read the gossip about the animals...

...because everything that happens in the

Kalahari gets printed out in the sand.

It's all printed out here. This is where

they started infringing on the patent.

Give it to me there.

Now, that I can present in court.

Go back to frame A.

And give me sales.

Cathy, will you take this?

And a printout on that.

Mr. Geoffrey says he has to go to

Hong Kong about the takeover.

- He won't make the ECACL conference.

You did the research,

so you deserve the honour.

I have to take this case

to court on Wednesday.

- Says you'll be back before Wednesday.

Xabe came with the news that...

... the animals are moving towards

the marula groves in the north.

He shouted, ''The marulas are ripe.

Xisa and little Xiri ran up

enough. If you're taller than my bow...

... the hyena will be afraid and stay

- Where is the conference this year?

They gathered a lot of marulas

and on the way home they found...

... the spoor of a wounded elephant.

Xixo said, ''This elephant is

He said to Xisa,

''You and Xiri can go on home.

Tell your mother we will come

when we've found the sick elephant. ''

There was a very strange

and beautiful pattern on the ground.

as beautiful as the first.

She wondered how anything could make

such a long, unbroken track.

She followed the track and saw

''This thing went round and round...

...and that's how it made such a long

and when it dropped...

...another one began to grow in its place.

Jacobus Johannes Uys (30 May 1921 – 29 January 1996), better known as Jamie Uys, was a South African film director, best known for directing The Gods Must Be Crazy. more…

The Gods Must Be Crazy II