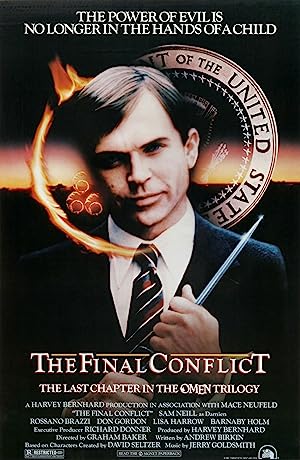 Synopsis: Now come into his full knowledge and power, the Anti-Christ in the body of Damien Thorne is about to strike his final blow. The Christ-child has been born again, on the Angel Isle, Great Britain (Scotland, England & Wales). The plan is simple, kill the Christ child to prevent him from growing up to bring the return of Christ and death of the Anti-Christ.
Genre: Horror
Director(s): Graham Baker
Actors: Sam Neill, Rossano Brazzi, Don Gordon, Lisa Harrow
Production: Twentieth Century Fox
1 win.

its first major threat of extinction,

a devastation rocked by nature: the Ice Age.

of the earth's surface uninhabitable,

and wiped out all but the hardiest

One of these few was man.

dawned a new age - and a new hope.

Phoenix-like, man arose from the frozen

wilderness and set forth upon his dream.

many catastrophes since then,

but none so grave

as the one which faces him today.

The economic crisis of the past decade

has brought inflation, famine and chaos

to every corner of the globe.

Some label it the Great Recession.

Others are calling it Armageddon,

that final upheaval of the world

foretold by the prophets of old.

But amid all the pessimism,

one voice rings out its faith in the future:

in building a new tomorrow.

much attention to that, Damien.

No, you're right. And there won't be

much attention to that bullshit either.

I said I wanted action, not words.

I wanna see Thorn at work.

clamouring for a bellyful of Thorn soya.

Instead of which, you spend half the

commercial giving us a third-grade version

of the history of the Ice Age.

Do we have footage of

Sure, but nothing new,

and most of it's been seen on TV already.

We'll find you something.

In the meantime, go with the old commercial.

I don't want that one used.

- What have we got coming up?

- Botswana next week, then the Aswan Dam.

- Can we get a film unit to Botswana?

- Sure, but no relief unit till after the coup.

- No one's sure how long that's gonna take.

- All right. It'll have to be the Aswan Dam.

Have a film unit there when it goes.

Make sure they give our relief units coverage.

Don't let the Red Cross beat them to it.

Why don't you go?

Now that would be a real coup.

- To be on hand when the president calls me.

of ambassador to Great Britain.

- I beg your pardon?

- Are you familiar with the Book of Hebron?

No, I don't know anything

about the Book of Hebron.

It's in the Apocrypha - one of the more

obscure backwaters of the Septuagint Bible.

"And it shall come to pass

that in the end days

the beast shall reign one hundred score

and thirty days and nights."

"And the faithful shall cry unto the Lord:

Wherefore art thou in the day of evil?"

"And the Lord shall hear their prayers."

"And out of the angel isle

he shall bring forth a deliverer,

a holy lamb of God

who shall do battle with the beast...

and shall destroy him."

"The beast shall reign one hundred score

and thirty days and nights"

is another way of saying seven years.

That's the time I've been head of Thorn.

"And out of the angel isle

he shall bring forth a deliverer."

The "angel isle" - the original Latin

Only it won't be the beast that is destroyed.

It'll be the Nazarene.

You said you were gonna be offered

What about our present ambassador?

I just had Mr. Sears on the line.

- No calls from anyone.

- This is the ambassador.

I want a press conference.

David Seltzer (born February 2, 1940) is an American screenwriter, producer and director, perhaps best known for writing the screenplays for The Omen (1976) and Bird on a Wire (1990). As writer-director, Seltzer's credits include the 1986 teen tragi-comedy Lucas starring Corey Haim, Charlie Sheen and Winona Ryder, the 1988 comedy Punchline starring Sally Field and Tom Hanks, and 1992's Shining Through starring Melanie Griffith and Michael Douglas. more…